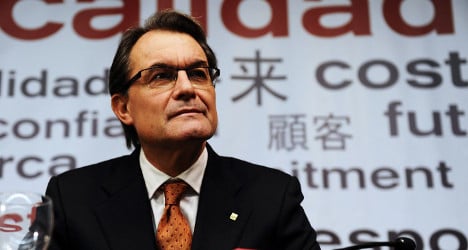 In what could be read as a statement of intention, the President of Spain's autonomous region of Catalonia has assembled a team to investigate how an independent Catalan state could operate within Europe.

The group of 14 experts, chiefly academics, will look at Catalonia's international relations with both Europe and Spain, El País reported on Friday.

Also on the agenda are the issues of energy politics, state structures, 'national defence' and taxes and pensions, among others.

The group, to be known as the National Transition Advisory Council met together for the first time yesterday in Barcelona's Palau de la Generalitat.

It is headed up by a former judge of the Constitutional Court Carles Viver Pi-Sunyer.

"This government is committed to the idea of an independent Catalonian state," said regional government spokesperson Francesc Homs after the group's first meeting.

During a press conference held after the group's first meeting, Homs stated the Mas and his government had a mandate to push towards an independent Catalonian state, reported Catalonia's La Vanguardia newspaper.

Homs added that Mas had never hidden the fact he would pursue this agenda if he won the November 25th elections.

The spokesman noted, however, that any documents produced by the transition council would not be binding.

He said that any implementation of such plans would be carried out by the executive.

Homs also said that there was no pretence of impartiality within the team.

Indeed, many of the group's members had already explicitly given their backing to the independence project.

But Homs was keen to point out that the team had been chosen for their "academic and professional worth".

He said that "the transition" was "possible" although "there was much work to be done", reported La Vanguardia.

The first report produced by the group will draw up the legal and political details of the independence road map  which could towards an independence referendum.

Spain's ruling Popular Party have, however, promised to fight this initiative with all means at its disposal, El Mundo newspaper reported.

The group is expected to produce its first report before the summer and all reports will be publicly available.

Before the November 2102 regional elections in Catalonia, the President of the Convergence and Unity Party Artur Mas campaigned on the promise that there would be an independence vote if he won power.

Despite winning the elections, however, Mas' party was unable to claim the majority needed to hold that referendum.