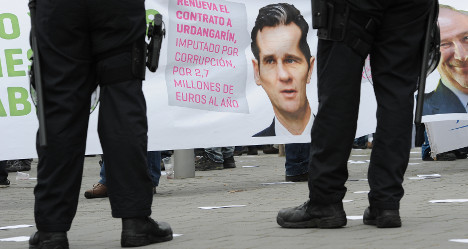 Police watch on as protestors demonstrate again the Spanish King's son-in-law's alleged corruption. He has yet to be charged with any offence. Photo: Lluis Gene

Spanish media reported on Monday that Urdangarin, a 45-year-old former Olympic handball champion, has been invited to either help manage Qatar's national handball team or promote the sport in the oil and gas-rich Gulf state.

The Manos Limpias, or Clean Hands, civil servants' union said it had asked the court in Palma de Mallorca that is leading the investigation into Urgangarin to declare him a flight risk and remove his passport because of the job offer.

"With this contract he could skirt his responsibility to the court. Since there is no extradition treaty between Qatar and Spain, when he is summoned to appear before a judge there is a risk that he will not show up," the union's secretary general, Miguel Bernad, told AFP.

Manos Limpias is acting as a private plaintiff in the corruption case, a status permitted by Spanish law.

The conservative group has been very active in combating corruption cases and was behind a lawsuit against renowned human rights judge Baltasar Garzon for abuse of judicial power which led him to be banned from the judiciary.

In its petition to the court Manos Limpias said its request was "not exaggerated or extravagant".

"On the contrary, it is proportional and logical," it added.

Urdangarin and his former business partner Diego Torres are at the heart of a corruption investigation, opened at the end of 2011, focused on allegations of influence peddling and embezzlement.

The pair are suspected of overbilling regional governments to stage sports and tourism events, and then siphoning off money to the non-profit Noos Institute, which Urdangarin chaired from 2004 to 2006.

Last week the court officially named Urdangarin's wife Cristina, the king's youngest daughter, as a suspect in the case after Manos Limpias asked it to do so.

The corruption scandal has angered Spaniards at a time when deep recession has pushed unemployment to a record 26 percent and the government has slashed public spending.