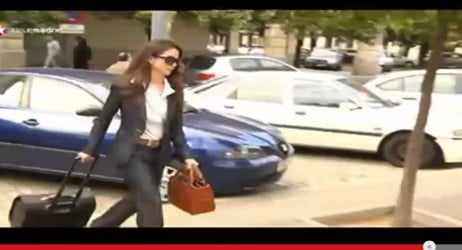 Who is Mercedes Alaya?

Mercedes Alaya is a Seville-born judge who faces the mammoth task of presiding over Andalusia’s sprawling ERE case, also known — rather more excitingly — as the case of the ‘reptile funds’.

The case originally involved the corrupt management of a pension fund for a firm called Mercasevilla.

'Fake' early pensions were paid out over many years to people who had never actually worked for the company.

This original case has since spread its octopus-like tentacles to cover huge numbers of associated kick-backs, not to mention all the trading in favours.

More than 60 people have been investigated to date, among them seven people who used to work for the Andalusian parliament.

To give you even more idea of the scale of the matter, there are already over 23,000 sheets of paper dedicated to the case and it doesn't look like stopping any time soon.

Yes. Literally. Alaya had to take six months off recently because she suffers from prosoponeuralgia.

This is a condition which involves sharp bursts of pain along the trigeminal nerve.

It's often caused by touching a trigger point around the mouth.

The condition has also been called the ‘worst pain in the world’ and is sometimes known as the 'suicide disease' as it is very hard to treat.

Alaya had to extend her sick leave a couple of times as she struggled with the problem.

And why is Alaya The Local’s Spanish Face of the Week?

You could argue that Alaya should be Spanish Face of the Week every week.

She is a member of an elite group of dedicated judges charged with investigating systemic corruption in Spain.

Alaya’s current case, however, is also the mother of all scandals.

Recently, however, Alaya had one her greatest success to date in the ERE case. In late March, 20 arrests were made around the country: in Sevilla, Jerez, Granada, Jaén, Madrid and Barcelona.

Among those arrested were lawyers, consultants and the one-time Director General of Employment for the Andalusian government.

Isn't the judge also something of a media darling?

You’re not wrong. Recently El País newspaper described Alaya as the ‘It’ girl of the moment, with that paper’s journalist wondering how everyone had survived during the months she was on leave.

Images of the rather elegant Alaya have been everywhere in recent times.

Mostly these images show the nearly 50-year-old judge rolling her suitcase along the street in the picturesque surrounds of Seville’s courthouse.

The fact that she is an attractive woman doesn't harm her reputation.

The judge has also clocked up more than 17,000 likes on Facebook, no mean feat for a public official in Spain.

When she was out on sick leave, her page was full of messages of support.

“We wish you all the best, our amazing judge. Rest and recover quickly,” was one such missive.

“We send you all the strength and love in the world.”

She must have a winning way with people.

That’s the thing. She keeps a very low profile indeed and public quotes from her are very rare.

She was described as distant, unstoppable, full of perseverance and enigmatic in Spain’s El Mundo newspaper.

ABC newspaper, meanwhile, described her as the "iron lady" of Spanish justice.

These are not the characteristics that usually win hearts.

Alaya likes to keep her private life off bounds.

A mother of four children, she is married to a well-respected auditor.

“The life of my husband and I is constantly being examined,” Alaya told El País newspaper a couple of years ago.

But she doesn't play the game.

The newspaper said that from the moment the judge stepped into her taxi after another gruelling day in court, she disappeared as if in a puff of smoke.

The next day, she returns to court in another outfit and with the same suitcase bulging with legal files.