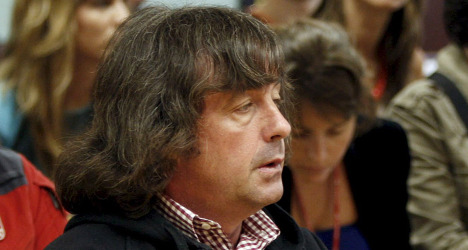 El Solitario during an earlier court hearing in 2008 in which he was found guilty of the murder of two policemen. Photo: Jesus Diges/AFP

Jaime Giménez Arbe, popularly known as ‘El Solitario’(The Solitary one), is facing 11 years behind bars after he robbed more than €21,000 from a bank in Alcobendas (Madrid) back in 2006.

El Solitario was carrying a gun and wearing the same beard he is suspected of using in several other bank heists, reported TV channel La Sexta on Tuesday.

He was not happy with the amount he was given by the bank employees at the Alcobendas branch of Banco Popular and CCTV footage showed him allegedly putting a gun to the hed of two people and then firing at the counter.

If found guilty, the bank robber will see another 11 years added to a 67-year sentence he already has under his belt for other crimes.

El Solitario faces seven years in prison for another bank robbery in Portugal, 47 more for the murder of two Guardia Civil police agents and another 13 years for another bank heist in Toro (Zamora), in which allegedly shot a man in the leg.

Knowing what he was in for in court, the serial bank robber decided to put on a show on Tuesday.

At the start of the hearing, the accused fell from his seat twice, prompting the judge to ask two Guardia Civil agents to hold him up.

El Solitario then spent several minuted sitting with his eyes closed in an apparently unconscious state.

Giménez’s alleged dizziness was checked up on by a doctor, who found him to be in perfect shape.

The judge was not impressed by the accused’s theatrical behaviour, asking him to “stop faking it”.

Giménez suddenly emerged from his made-up slumber and let the judge know he thought he was going to be found guilty.

“Your honour, give me one last ciggy. You’re going to sentence me anyway,” Giménez was quoted as saying to the court in La Vanguardia newspaper.

During the verbal exchange, the judge asked Giménez to stop trying to have the last word on everything.

The accused replied that he felt like he was in the era of (former Spanish dictator) Franco.

Gimenez’s lawyers asked for the hearing to be adjourned because their client was on a hunger and thirst strike in protest against the conditions in which he’s being held in a prison in Portugal for his other crimes.

He was brought over from Portugal especially for this latest hearing.

El Solitario was so committed to his strike that he asked for water twice during the hearing, saying “I need water to recover and speak”.

He argued that the 24 witness statements in the case were non-conclusive.

He added bystanders at the bank had seen a “Utopian character known as the solitary one”.

"El Solitario" is known to have used various disguises to pull off some 30 armed robberies.