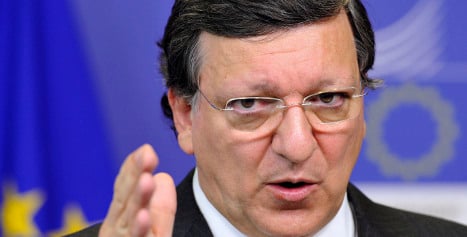 Spain, where the banking system has already been bailed out, and Slovenia, favourite to become the sixth eurozone country to need a debt rescue, had "built up excessive macroeconomic imbalances," the worst rating of 13 EU countries reviewed, the Commission said.

With more bleak data out of Spain, the Commission said the imbalances in debt, unemployment and growth were doing long-term damage, with more than 50 percent of under-25's unable to find a job.

"Our citizens are still paying the price for the unchecked development of imbalances in the past," said a Commission statement, noting especially "very high domestic and external debt levels" in Spain.

These, it said, "pose serious risks for growth and financial stability," calling on Spain to deliver a "decisive" reform programme by the end of the month for EU approval in late May.

"Although adjustment is taking place, the magnitude of the necessary correction requires continuous strong policy action," the Commission said, despite a "visible adjustment in the current account balance, reduction in financing costs and a reduction of immediate risks."

Essentially, a "further contraction in economic activity, rising unemployment, and the need for public support for the recapitalization of a number of banks" over the past year has "exposed the vulnerabilities represented by those imbalances for growth, employment, public finances and financial stability."

For Slovenia, "urgent policy action is needed to halt the rapid build-up of these imbalances and to manage their unwinding," it said, highlighting the plight of its banks saddled with a growing pile of bad loans.

New Slovenian Prime Minister Alenka Bratusek insisted on Tuesday after meeting Commission head Jose Manuel Barroso that her government was already working "day and night" to save a banking system that the Organization for Economic Co-operation and Development also says is in urgent need of repair.

The Commission said Wednesday that "in a context of accelerating negative economic trends, the risk (to) financial sector stability stemming from corporate indebtedness and deleveraging is substantial.

"These risks are compounded by limited adjustment capacity in labour and capital markets and by an economic structure dominated by state-ownership," the EU's executive arm said.

The other 11 countries reviewed and judged to be "experiencing macroeconomic imbalances" to a lesser degree than Spain or Slovenia were Belgium, Bulgaria, Denmark, France, Italy, Hungary, Malta, the Netherlands, Finland, Sweden and the United Kingdom.

All 13 countries will have to present remedies for EU approval under new rules giving Brussels more oversight over national economic planning.