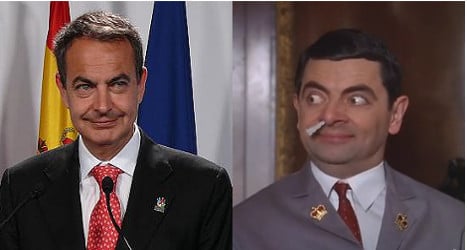 Double take: Which of these two men in an English comedian? Photo: YouTube

If you turned on the television a few years back, you might have been surprised to see the famous TV character Mr Bean giving a speech in Spanish parliament.

Despite the eyebrows and the wide grin, it wasn't the actor Rowan Atkinson talking about tax reform though.

It's just that Spain's then Prime Minister José Luis Rodríguez Zapatero had an uncanny resemblance to the English comic.

In fact, these two are perhaps the most famous lookalike pairing in Spain in recent times.

But there are many more though.

A few weeks ago, we draw readers' attention to the strange case of Valencia's archbishop and Francis pope-alike Carlos Osoro.

Now in this week's Local List, we give you a rundown of some other great and not-so-great Spanish–International celebrity pairings.