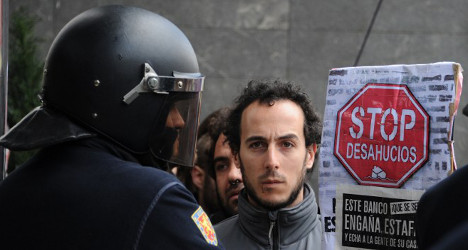 The group led by Ada Colau are planning the "most active weeks" of their campaign to fight evictions yet, reported El Mundo on Wednesday.

PAH are campaigning to support the implementation of a popular initiative which was presented in Spain's parliament in February and signed by over a million and a half people.

The anti-evictions group say Spain will now see a "green spring", a reference to the the colour of the t-shirts made popular by the group's followers.

In coming weeks, the group's members also plan to continue carrying out so-called "escraches" or targeted protested in front of the homes of deputies and leaders of the Popular Party.

The term "escrache" comes from Argentinian slang for 'denunciation' and is a well-known form of protest in that country.

On Tuesday, protestors gathered in front of the offices of Spain's ruling Popular Party in dozens of cities.

One protestor in Madrid said that the escrache was "the only remaining way to fight".

The protests around the country yesterday were peaceful.

But members of the PAH maintained they would not back down.

They said their cause was a question of "human rights" and that "there are lives in play".

They also said any politician who opposed the February's public initiative could be the target of an 'escrache'-style protest.