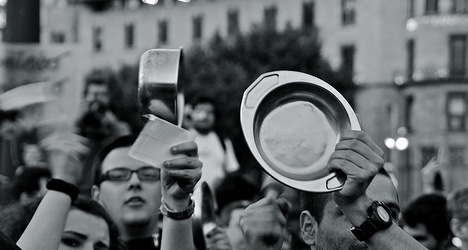 Making noise: Unemployment and corruption in people have seen people taking to the streets at every more frequent intervals. Photo: Pepe Pont

The latest CIS Barometer for March shows that unemployment is clearly the chief preoccupation for most people in Spain, with 81.6 percent of people saying this is one of their top three concerns.

More and more people, however, are concerned about corruption and fraud.

A total of 44.5 percent listed these as being one of their top three concerns in Spain.

The research poll also found that nearly a third of all Spaniards (31.4 percent) thought that "politicians, political parties and the political climate in general" was one of the three biggest problems facing Spain.

In the latest CIS barometer, the social research institute also asked people about their preferred model of state.

Roughly a third of people (32.4 percent) of Spaniards said they favoured the current model with autonomous provinces.

Around a quarter of people, or 24.2 percent, said they would prefer a central government without autonomous regions.

Meanwhile, in terms of identity, 52.8 percent of people said they felt equally Spanish and a member of their own autonomous community.

The latest CIS study also asked people in-depth questions about their perceptions of the media.

Television was the main source of news for most Spaniards with nearly half of all people saying TV played a "great role" or a "substantial role" in forming their opinion.

For social media, this figure was just over 15 percent.

In terms of trust in the media. some 56.4 of respondents in the CIS poll rated their confidence from '4' to '6' out of a possible ten.

Again, people had the least trust in social media, with the average rating being 4.56 out of ten.

CIS interviewed 2,477 people aged 18 or over nationwide from March 1st to March 12th to obtain its results.