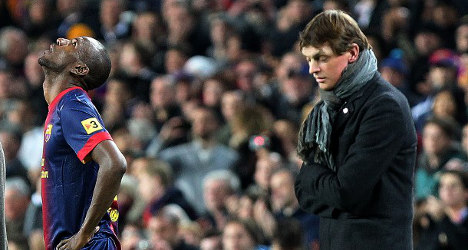 Juan Carlos Garcia-Valdecasas helped carry out the 33-year-old's transplant a year ago and has said that to see him return to playing top-class professional sport was unprecedented.

"My first objective was that he would continue to live and enjoy a high quality of life with his family," he told Catalan radio station RAC1.

"Now we can say that the recuperation has been a miracle, an extraordinary case, because precedents like his don't exist.

"The majority of patients can live a normal life, even 90 percent have an extraordinary quality of life, but his case is not normal.

"Medicine continues to set new goals and Abidal has marked another one for us going forward."

The Frenchman was initially diagnosed with liver cancer in March 2011 and underwent an operation to remove a malignant tumour days after.

Abidal then had to undergo a full liver transplant in April of 2012 due to unresolved problems in the initial operation.

But 14 months later, the France international returned to the pitch towards the end of Barca's 5-0 win over Mallorca on Saturday.

Garcia-Valdecasas said he believed that if required, the player was in the right physical shape to take part in Barça's crucial Champions League quarter-final second-leg against Paris Saint-Germain.

"He is a Barcelona player and is in the squad. He wants to be there, he wants to play and therefore I don't think we should treat him in a different manner.

"I didn't have any idea he was going to return this Saturday, although I knew that sooner or later he would return to playing. I haven't spoken with him but he could perfectly well play against PSG."

Garcia-Valdecasas also confirmed that Abidal's statement at the weekend that he would like to continue playing for a couple more years was perfectly attainable.

"If everything goes well, he could continue for two more years."