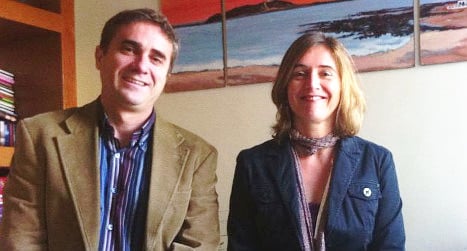 Where are you from originally Harriet?

I’m from just outside Hamburg, in northern Germany.

I did advanced secretarial studies as a European Management Assistant in the early 1990s. This included subjects like Spanish language, translation and stenography.

As part of my studies, I had a six-week placement with (the electrical and electronics firm) Siemens.

The company offered me a choice about which office I could work in, and I’d always wanted to go to Spain, so I went to Seville.

That’s where I met my husband Javier.

Did you move to Spain straight away?

No, but when I finished my studies a year later I started looking for work across Andalusia. The best offer came from the food supplier Bofrost. First I spent a year there as a management assistant.

After that, I found a job in Seville as an assistant to the head of a logistics department.

Then in 1999, I had my first child and became a freelance Spanish to German translator.

With no one to look after our child, I decided to work at home.

In the mid-2000s, I discovered that lots of German investors wanted to invest into photovoltaic systems, or systems that use sunlight to create electricity.

There were good subsidies for this industry in Spain, and the Germans saw it as something of a gold mine.

I spent a lot of time translating and interpreting for these companies, and then branched out into helping them find personnel and apartments.

So how did you end up in IT?

My husband Javier worked in software development in Ericsson until the end of 2010 and then took a voluntary redundancy package.

We talked together and decided to take a chance and set up a company on our own.

We set up a software development company, which was a fairly easy process, although it took a while. Then we spent about nine months looking for contacts.

We received a few orders for software programming offers and even took on a couple of staff to work for us.

But some our clients — and these included large and important organizations in Spain — were very slow in paying us. It made it almost impossible to operate.

We knew that German companies were looking for IT staff and for software engineers and developers so we decided to set up a recruitment agency.

Because of my background, I was able to go out and speak to companies in Germany. We also conducted massive mail outs and advertised on social networks.

At the same time, we began to recruit IT people here in Spain and conducted around 300 interviews with potential candidates.

So now we are setting up a nearshoring business.

Basically, it’s about offering IT services in a foreign country. In this case, we’re talking about employing Spanish people to work in Spain, but for German firms.

It’s called nearshoring because —unlike offshoring, which sometimes frightens business people who think you are talking about moving services to India or China — the staff in a nearshoring situation are working in the same time zone.

With Spain and Germany, managers can also travel back and forth relatively cheaply to keep in touch with what’s going on.

Do your IT staff need to speak German?

Not necessarily. It’s an advantage obviously, but a good level of English is sufficient.

And what do German firms make of the nearshoring idea?

The Germans are quite entrenched in their habits, and usually want someone working on site.

But one huge advantage of nearshoring is that firms can rapidly hire qualified people who perhaps aren't prepared to actually move to Germany.

On top of all that, there are all these empty offices in Spain which can be rented out a cheap rate.

So with nearshoring you reduce unemployment in Spain and German firms get the service they need at a good price.

It should be a win-win for both parties.

Are you getting any support for your business?

Yes. We have got a grant from ICEX, which is the Spanish foreign trade institute. They are paying for half of our costs including those of our trips to Germany, for meetings and marketing and publicity.

That support lasts for 24 months.

Are they any challenges at the Spanish end?

Well the people who work in a nearshoring environment here in Spain need to adapt their work habits.

They have to basically work German hours, for instance.

At the same time, a lot of people are excited by the idea of the challenge of working for a foreign firm, and of course the pay is often better than many IT professionals could expect to earn here in Spain by working for a Spanish company.

To find out more about Uintuin, see their website here (in Spanish).

The German site is here.