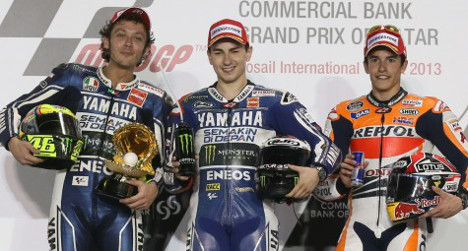 Spain's Jorge Lorenzo began his MotoGP title defence in style with an emphatic win in the season-opener at Qatar's Losail International Circuit on Sunday.

The Yamaha ace charged to the 24th win of his MotoGP career, finishing 5.990 seconds ahead of teammate and seven-time MotoGP champion Valentino Rossi.

MotoGP rookie Marc Marquez of Honda took a superb third on his debut in the top division, staged under floodlights.

Pole-sitter Lorenzo held the lead right from when the start and held on till the chequered flag while the rest of the field behind him traded places.

"I knew it was going to complicated. I'm happy that Valentino came back in second place, it's good for Yamaha," Lorenzo told BBC television.

Rossi, who had had an ordinary weekend going into Sunday's race, came into his own in the final stages of the race, going past Honda riders Dani Pedrosa and Marquez in quick succession.

Im Moto2, a tightly-fought duel between Catalan Po Espargaró and  Englishman Scott Redding for the first win of the Moto2 season ended in the Spaniard's favour.
Espargaró started his charge for the Championship in the best possible manner with victory at the Grand Prix of Qatar, which he took from pole position.
He managed to hold off a persistent and courageous challenge from Scott Redding, as the pair fought for the win right down to the final lap.
Moto3 produced another thrilling Spanish win in the season opener at Losail, where Majorcan Luis Salom rode a perfect race.
Salom rode an awe-inspiring race to win the first of the Moto3 season at the Quatar's Grand Prix on Sunday, as the category produced another incredible spectacle that went down to the last lap. 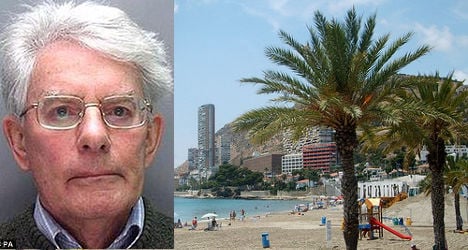 PAEDOPHILE
‘Most wanted’ paedophile to be handed back to UK

Police arrested the man after receiving a call from an Alicante resident saying he had seen MacCartney's face on a television news programme. Photo: Crimestoppers/E Turtle/Flickr

Michael McCartney was arrested in the southeastern city of Alicante after he appeared on a list published on Thursday of the 13 most wanted British fugitives in Spain.

A judge at the National Court in Madrid today "ordered him to be handed over to the United Kingdom, where he is wanted for 11 sexual crimes against children", a court source told AFP.

After Spanish police included his photograph on its most-wanted list of British fugitives released to the media, "apparently a neighbour recognised him and called the police," said the source, who asked not to be named.

McCartney was wanted by police in the English county of Hertfordshire, north of London, where he groomed his victims by buying them presents that their parents could not afford, according to the list.

A British court convicted him of the 11 charges in March this year and McCartney failed to turn up when summoned for sentencing the following month.

Appearing before a judge today, he agreed to be handed back to Britain and is due to be sent there in 10 days, the court source said.

British criminals have long seen the sunspots of southern and eastern Spain as a place to blend in among their many resident compatriots, but several have been arrested there this year.

On Thursday police arrested another British paedophile, Donald Cassidy, also 78, in the town of Estepona, near Marbella on the southern Costa del Sol.

He and McCartney were both arrested under European arrest warrants, which came into force in 2004 and have made it easier to catch cross-border fugitives in the European Union.