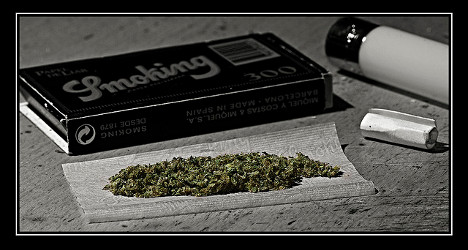 Mean, green, fighting machine: Police got more than they bargained for when they stopped lawyer Enma Valiente. Photo: Wiro/Flickr

The dope-smoking lawyer’s extreme overreaction has come at a high cost.

Enma Valiente will spend a year behind bars and will have to pay a €1,442 fine for her assault on police officers, reported news website Teinteresa on Thursday.

The incident happened back in 2007.

Valiente, a lawyer for the Andalusian Workers’ Union (SAT), spat at one of two policemen who had apprehended her while she was rolling a spliff.

The court heard how the accused reacted badly, shouting: “You clown! Who do you think you are? You Nazi!” at one of the officers.

Valiente refused to show her ID and spat at the policeman.

Her friend Eduardo Montero, who has also been charged, grabbed the other officer by the neck, leading to a scuffle which ended up with the policeman on the ground.

Valiente then kicked the prone officer in the leg.

When the other cop tried to break up the fight, he also received a boot in the hand from Valiente.

The two incredulous policemen had to call in reinforcements as the raging lawyer continued to “take a disrespectful and aggressive attitude”.

Both officers required medical attention after the incident.

During the court hearing, Valiente and Montero claimed the policemen had hit them with their batons, and that they had not in fact attacked the police, as was alleged.

This was, however, discounted as “implausible” as it didn't correlate with the evidence in the medical report provided.