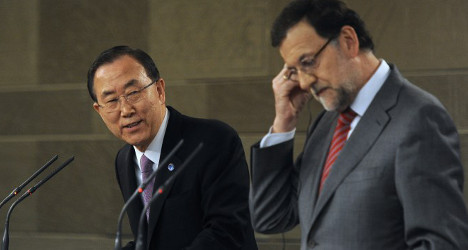 Halving the number of people who live on less than one dollar a day by 2015 is one of the goals that was set in 2000.

"I am making an appeal that we speed up the actions which we must take," the UN chief said at the end of a meeting of United Nations agencies in Madrid.

"We must carry out the promises we have made, which we made to families around the world," he added.

The UN Secretary General's comments came a day after Spain's El Pais newspaper reported Spain had cuts its official development aid by half in 2013.

El Pais said this was a long way from the target of 0.7 percent of GDP for aid spending set by the ruling socialist government of the time.

"With these brutal cuts, we are now at the levels seen at the end of the 1980s," said a spokesperson for the peak development NGO CONGD.

But Spain's Foreign Ministry responded by saying that budget cuts had obliged them to make cuts.

Not all European countries have cut their aid spending to such a great extent during the crisis. Portugal has made cuts of 12 percent while Greek spending on aid fell 17 percent.

Luxembourg is at the top of the European aid spending table, giving out 1 percent of its GDP towards development.

In terms of progress towards the Millennium Development Goals certain countries achieved the goals set down, many — particularly in the most needy areas such as sub-Saharan Africa — have made little progress.

Around 870 million people around the world suffer from hunger, the head of the United Nations Food and Agriculture Organisation, former Brazilian minister for food security Graziano da Silva, told the gathering.

"Despite the efforts which we have made, the numbers are not very encouraging," he said.

"Women are the secret weapon against hunger, they are the ultimate force multiplier to fight against malnutrition. When women have food children eat.

When they are helped to grow food, communities eat," he said.