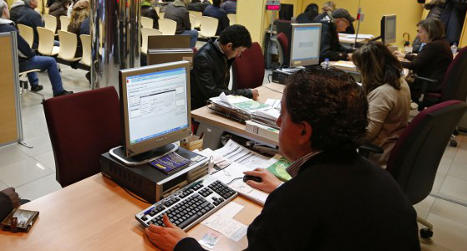 Government workers in an office of the 'new' Spanish Department of Employment and Social Security. Photo: Cesar Manso/AFP
The ruling Popular Party government led by Spanish prime minister Mariano Rajoy paid €103, 426 to rebrand various government departments and ministries, the news site Te Interesa reported on Friday.
The information emerged in response to a parliamentary question from ex Development minister and current member of parliament for Spain's opposition socialist PSOE party José Blanco.
When putting his question to the government, Blanco had stressed that the Popular Party has pursued a policy of austerity "to the point of irrationality" and was asking Spaniards to make new "sacrifices" every day while public services continued to worsen.
He then questioned waste in the government itself.
Responding to Blanco's request for information, the Popular Party said when it came into power, it changed the names of six ministries.
These were Education, Culture and Sport, Employment and Social Security, Agriculture, Food Production and and the Environment, Economy and Competition, Ministry of Finance and Public Administration, and Health, Social Services and Equality.
Total costs for changes to lettering and signage were just over €100,000.
The government said  Cristóbal Montoro's "new" Ministry of Finance and Public Administration had spent the most on these changes: €40.485.
The second biggest spender was the Department of Employment and Social Security. Their restructuring cost 16.332.38.
The Department of Education, Culture and Sport, meanwhile, defended its increased spending on signage by saying it had reduced its spending on stationery by €1,000.