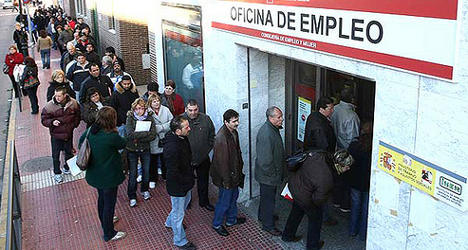 Many young Spanish people have simply given up the searching for work. Photo: Mendoza Economico/Flickr

Some 864,100 people under the age of 25 in Spain have decided hunting for a job just isn't worth it, the study by Asempleo shows.

Nearly 33 percent fewer young people are now actively seeking work than when the crisis hit in the third quarter of 2007.

The figure represents a huge loss of faith in Spain's job market among young people, Asempleo stated in a media release on Thursday.

Asampelo — which represents employers offering temporary contracts in Spain — also reported that the number of people aged under 25 actively looking for work in Spain had shot up to 930,000 by the end of 2012.

This is twice the number of people in this cohort who were seeking employment before the crisis (458,000).

At the same time, youth unemployment in Spain is 55.1 percent  — up from 18 percent before the crisis, Asempleo said in its report.

Of this group, 45.9 percent had been looking for work for over a year, meaning they were classified as 'long-term unemployed´'.

The Asampleo spokesperson said doing temporary work for different companies could help lead to young people getting a permanent position.

Rivarés also pointed out that while youth unemployment was a serious problem throughout Europe, the highest jobless rate for this group in Spain was particularly alarming.

He did, however, express his approval of government reforms that link all work contracts "no matter how brief they are" with training.

Speaking about the unemployment situation in general, Rivarés said it was "now more important than ever" to improve collaboration between public and private employment services.

"It's also key to link what students learn at school and universities as much as possible with the needs of businesses," said the spokesperson.

"This is particularly important at the university level where the major part of learning and knowledge undertaken should be lead to obtaining work."

Rivarés concluded that "all worker in all professions, continual education is essential."

Asampleo says that of the 752,000 people aged under 25 in Spain who currently have a job, 528,000 are not undertaking any kind of education or training.

The Asempleo report shows, meanwhile, that jobless rate among young people with only secondary education is 81.8 percent.

For young people with higher education qualifications, this figure is 42.5 percent.