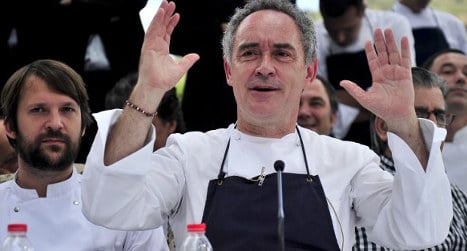 Top Spanish chef Ferran Adrià in 2011 before the last ever meal at the famous elBulli restaurant in Roses, north of Barcelona: Photo: Josep Lago/AFP

The winner and three companions will be dining at Tickets Restaurant in Barcelona, the hometown of the famous chef, who ran the Michelin three-star elBulli restaurant in Spain until it closed in 2011.

"The elBullicellar sale has produced a tremendous result, due to both the exciting wine and lifestyle lots and the global fame of Ferran Adrià," Sotheby's head of international wine Serena Sutcliffe said in a statement.

Britain's Restaurant magazine ranked elBulli as the best restaurant in the world a record five times.

Wednesday's auction also sold 445 wine lots from the elBullicellar, to rake in a total of HK$14.1 million.

Proceeds of the auction will go to the elBullifoundation, the chef's new non-profit research foundation, which is set to open in 2014 and is aimed at further developing his trailblazing approach to cooking.

Adrià, who joined the kitchen staff of elBulli in 1984, has since the late 1990s rocked the world of gastronomy by using science to "deconstruct" and rebuild food in what has been termed "molecular cuisine".