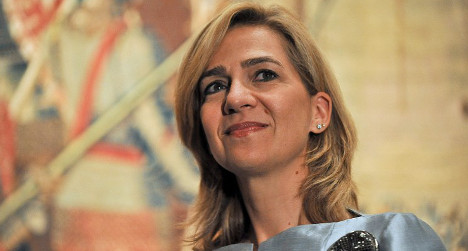 The King of Spain's oldest daughter, the Infante Cristina, has received a court summons, a first for a member of Spain's royal family. Photo: Nicholas Kamm/AFP

A Spanish judge named King Juan Carlos's daughter the Infante Cristina as a suspect in a corruption case on Wednesday, dealing a spectacular blow to the prestige of the royal family.

It is first time a member of the Spanish royal family has been called to appear in a court of law on suspicion of wrongdoing.

The 47-year-old duchess must testify as a suspect on April 27 at the court in Palma on the Mediterranean island of Mallorca, said a written ruling by the judge, Jose Castro.

"The royal household does not comment in any way on judicial decisions," a spokesman for the royal family told AFP.

The case, which was opened at the end of 2011, is centred on allegations of embezzlement and influence peddling against her husband, former Olympic handball player Inaki Urdangarin, and his former business partner Diego Torres.

The pair are suspected of syphoning off money paid by regional governments to stage sports and tourism events to the non-profit Noos Institute, which Urdangarin chaired from 2004 to 2006.

The Infanta — the seventh in line to the Spanish throne — had seemed set to avoid being snared by the case.

But the judge said evidence, including emails provided to the court by her husband's former business partner, raised doubts that she really was unaware of the business operations of Noos.

Closing the case without hearing the princess, who was a member of the Noos board, would "discredit the maxim that justice is equal for all", he said.

The princess is accused of allowing the lustre of her royal connections to be used by the Noos institute.

Urdangarin, who has not been charged with any crime and maintains his innocence, had sought to distance his wife and the rest of the royals from his business dealings.

But Torres provided the judge with emails, which were leaked to the press, appearing to show that Urdangarin regularly consulted his wife about Noos affairs.

Cristina's personal secretary, Carlos Garcia Revenga, also was questioned by the judge after Torres submitted another batch of emails that suggested he was actively involved in the Noos Institute's dealings.

Spain's 75-year-old king, recovering from surgery in March for slipped discs, his seventh operation in three years, is credited with steering Spain to democracy following the death of General Francisco Franco in 1975.

But Juan Carlos' standing has taken a hit over the corruption probe and over a luxury elephant-hunting safari he took in Africa last year at a time of record unemployment in Spain.

Nearly 57 percent of Spaniards feel the king should abdicate in favour of his 45-year-old son Prince Felipe, according to an opinion poll released last month.

Cristina, who works as the director of social welfare programmes at Barcelona-based financial services group La Caixa's charitable foundation, has kept a low profile since the scandal broke.

The easy smile she was known for has been replaced by a grim expression during her rare outings.

A fan of various sports, especially sailing, Cristina met Urdangarin at the 1996 Olympics in Atlanta where he was competing with Spain's handball team, which won a bronze medal.

In 2009 Cristina and her husband, along with their four children, moved from Barcelona to Washington where Urdangarin took up a job as an executive director of the US subsidiary of Spanish telecoms giant Telefonica.

The couple, who were given the title of Duke and Duchess of Palma when they wed, were living in the United States when the allegations of corruption at the Noos Institute first broke in Spain.

"All we want to do is live a normal life and you won't let us," she said when approached by a Spanish television reporter at a Washington supermarket in February 2012, just before her husband was questioned in court in Palma for the first time.

In August last year the couple and their four children returned to Barcelona, where they own a mansion in the exclusive Pedralbes area that reportedly cost around €6 million ($8 million).