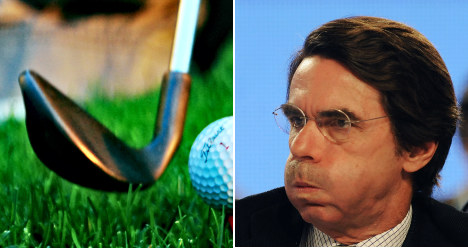 Teed off: Spain's former prime minister José María Aznar scored free golf lessons in 2001. Photo: chispita_666/Flickr/Cristina Qicler/AFP
The ex-Popular Party prime minister and his wife Ana Botella — the current mayor of Madrid — enjoyed the free golf lessons in the Spanish capital, reported El Mundo on Tuesday.
These lessons were held at the Club de Campo which is an enterprise that receives much of its cash from the public purse.
But the Aznar clan paid less than half of the money they owed for the classes. Instead the club itself stumped up for many of the hours.
El Mundo said that the golf club had four invoices for 285.5 hours of classes given to Aznar and his family. The total cost for these classes came to €11,700.
But a local councillor for the area at the time, Fernando Villalonga, told the newspaper that the Aznars had only paid for 116 hours of classes with a total value of €4,485.
That leaves €8,700 outstanding.
Villalonga, who is now a councillor for the mayor Ana Botella, said "The Aznar family didn't know that Club de Campo was paying".
He claimed the classes were a courtesy to the former prime minister  and that Aznar would not be asked to pay now because his presence had helped to promote the club.
However, the councillor said the golf club would investigate the matter.
Villalonga also said the club had a huge waiting list of people wishing to take part in golf classes similar to those enjoyed by Aznar.
Aznar was prime minister of Spain from 1996 to 2004. He lost the 2004 elections partly as a result of his government claims that the 2004 train bombings in Madrid were the work of the Basque terrorist group ETA.
A judge later found that a Moroccan national had carried out the attacks although no direct link to Al-Qaeda was established.