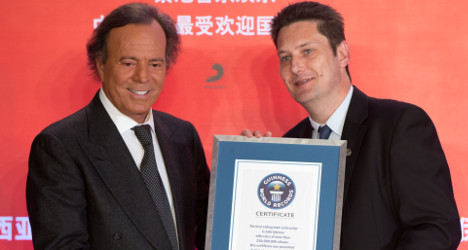 Spanish singer Julio Iglesias' fame in China is as epic as that of US actor David Hasselhoff in Germany. Photo: Ed Jones/AFP

The 69-year-old Iglesias added yet more glitz to a stellar career when he received two mega awards at a pulsing ceremony in the Chinese capital.

On the night, the singer — perhaps best known in the English-speaking world for his song To All the Girls I've Loved Before — received a Guinness World Record for the Best-selling Male Latin Artist.

He has sold over 300 million albums and has clocked up number one hits in a record number of languages.

The "living legend" also got a Sony Music Entertainment gong for being the "First & Most Popular International Artist in China Award". This prize was presented by Chinese pianist Lang Lang.

“This is one of the most exciting moments in my career.” Iglesias told an ecstatic auditorium.
“I have always thought China was an incredible country,” he told the audience.
Recalling his past concerts in China — he last visited the country in 1995 — he explained his "special connections" to the country.
“For me, dancing on the Great Wall 20 years ago was a moment of magic in my life. I closed my eyes, and I forgot where I was. I just remember the feeling.”
The writers of Iglesias' official website put his success down to the fact that he can sing in "more than 12 languages and connect with so many different cultures around the world.
"Even today, no one else can boast a discography of 80 albums in so many languages."
Iglesias other major honours include a Grammy Award for Best Latin Singer and a Star on the Hollywood Walk of Fame
“I don’t believe in frontiers," Julio says on his website.
"I don’t believe in nationalities. I believe in people."
On March 1st, Iglesias  launched his 2013 World Tour in Russia. The singer has also just released a greatest hits album.