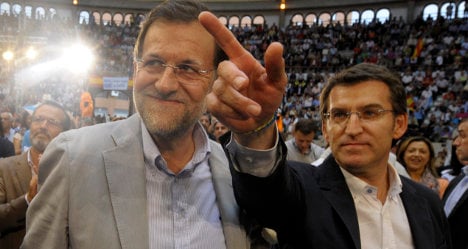 The 1995-1996 photographs of Feijóo, since 2009 the leader of Spain's north-western Galicia region and seen as one of the potential successors to Prime Minister Mariano Rajoy, and Marcial Dorado were published by leading newspaper El Pais at the weekend.

The pictures show the two men soaking in the sun on board a boat as well as them getting out of a car together. According to local media, Dorado is currently serving a 14-year prison sentence for drug trafficking.

"When I knew him, I knew nothing of his past, nor his activities," Feijóo, of the governing Popular Party (PP), said during a press conference called to explain the photos after the opposition had demanded his resignation.

"I've always acted within the law," he said, adding that "there is neither a close and deep friendship, nor a direct relationship" between himself and Dorado anymore.

The pictures have whipped up a new media storm around the party whose credibility has already suffered a serious blow by the so-called Gürtel case, a business and political corruption scandal related to contract awards, allegedly reaching into its senior ranks.

"If I'd had the slightest doubt that I may have done something illegal during my professional career, as a civil servant or politician, I would clearly be in a delicate situation. That is not the case," he said.

Feijoo said he had informed Rajoy of the existence of the photographs and their planned publication and that the premier had asked him to explain the content and scope of them.

The online newspaper Público responded to Feijóo's claims by saying that the politician had to be the only Galician in 1995 who did not know what type of activities Dorado was engaged in.

The paper alleged Dorado had been engaged in tobacco smuggling well before 1995, operating in the area of his home island of Arousa where he was known as the 'Marshall of the Island'.

He was under investigation from 1984 onwards and was briefly held in 1990 but released with charge. At the time, according to Publico, the press were already written about his tobacco smuggling activities.

In 2005, Dorado was sentenced to ten years in jail for smuggling cocaine.