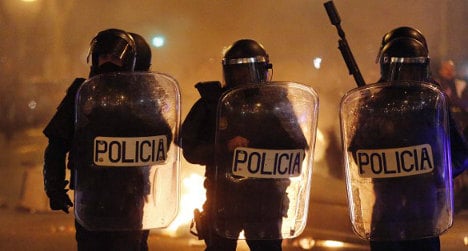 The move comes in the wake of a report by Spain's Public Defender Soledad Becerril.

In that report, the senior official stated her office had received numerous complaints from people who had been unable to identify individual officers of the Police Intervention Unit (UIP), Spain's El Pais newspaper reported on Monday.

The office said that people had told them police identification numbers were often hidden under bulletproof vests or written in very small print.

From now on, however, agents will have to wear padded jackets that clearly bear their identification number on the back.

The numbers — which will identify the unit of officers, their vehicles, and their position in teams — will be attached with velcro.

However, the police have added their own conditions: they will change these numbers everyday as part of a move they say is to stop persecution of individual officers.

The number a police officer 'wears' on any given day will be registered with the UIP so that all agents can be identified as and when needed.