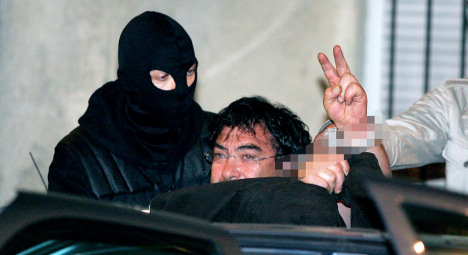 Javier Lopez Pena is seized by police in May 2008 in Bordeaux. Photo: Nicolas Tucat/AFP

Javier Lopez Pena, who used the alias Thierry, was believed to have been one of the masterminds of a 2006 car bomb attack at Madrid airport that killed two and ended a ceasefire by the banned group.

He died overnight Friday in the Pitie-Salpetriere hospital after suffering a stroke, the police source and a Basque prisoner support group said.

Pena had been on the run since 1983 before his arrest in May 2008 along with other suspected ETA members when police raided an apartment in the southwestern French city of Bordeaux.

He took the place of ETA's political chief Josu Ternera in 2006 during the outfit's failed peace negotiations with then prime minister Jose Luis Rodriguez Zapatero's government, according to Spanish anti-terrorism sources.

Pena was seen as a hardliner and reportedly pushed for ETA to end a ceasefire it had called in the middle of the last decade.

ETA announced a "permanent ceasefire" in March 2006 but formally called it off in June 2007, citing frustration with the lack of concessions on the part of the government in their tentative peace process.

Pena joined ETA in 1980. Three years later he was detained in the French city of Bayonne and jailed for his involvement in ETA's extortion ring.

The outfit partially financed its activities by demanding that businesses in the Basque region pay a "revolutionary tax".

Pena is believed to have occupied several positions in ETA, including being responsible for the group's explosives and heading its military apparatus, before becoming the leader of the outfit.

Considered a terrorist group by the European Union and the United States, it announced in October 2011 that it was giving up its armed struggle.