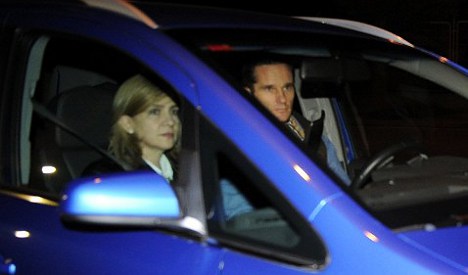 Princess Cristina and her husband Iñaki Urdangarin arrive at the Marivent Palace on the island of Mallorca on February 24th 2012. Photo: Lluis Gene/AFP

Iñaki Urdangarin, who is married to Princess Cristina, and former partner Diego Torres are suspected of siphoning off millions of euros paid by regional governments to the Nóos Institute.

Both men have denied any wrongdoing and have not been charged with any crime, but the scandal is casting a growing shadow over the royal family.

Urdangarin, who gained the title of Duke of Palma when he married Princess Cristina, was chairman of the charitable body from 2004 to 2006.

When Urdangarin was questioned in court last month by a judge investigating the corruption case on the Mediterranean island of Mallorca, he sought to distance the royal family from his suspect business dealings.

But Torres has been releasing emails and other documents in recent weeks in a bid to implicate the royal household in the affair.

The emails "detail how the duke explained to his wife the details of the Nóos Institute's affairs since she was part of its executive committee".

In one email dated February 20th 2003 published by the online editions of daily newspapers El Pais and El Mundo, Urdangarin asks his wife for her opinion on a document which he had prepared for clients of the Nóos Institute.

Last month Spanish media published other emails that it said were sent by Urdangarin which appeared to indicate that King Juan Carlos closely followed his business dealings.