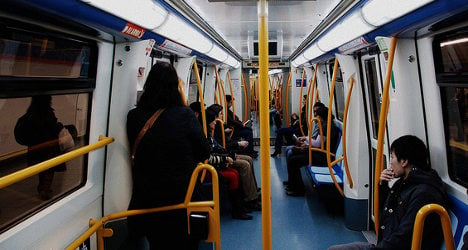 Pickpockets on Madrid Metro often target passengers on their way home after a night out. Photo: LWY/Flickr
The thieves used the same modus operandi every morning between six and eight: using a penknife, they ripped the trouser pockets, handbags and jackets of Madrid Metro passengers who had fallen asleep or were distracted.
If they got caught, the crafty quartet would intimidate their victims with a variety of weapons, online daily Madrid Diario reported.
Police arrested the suspects in the early hours of last Saturday after being alerted by a passenger who woke up from his slumber while he was being robbed.
When the man confronted the men who'd stolen his wallet and mobile, they took out two massive machetes and hit him over the head.
Madrid Metro's mobile brigade caught a glimpse of what was happening when the train stopped at Aluche station.
When they apprehended the four thieves, one of the suspects punched one of the officers in the face and the pickpockets took off down the platform.
Police caught one of the crooks at the station and the other three were spotted soon after in Madrid's central La Latina neighbourhood.
Madrid's Transport Police say they encounter similar crimes in the city's metropolitan area on an almost daily basis.
The thieves, usually between the ages of 18 and 30, go unnoticed because of their smart attire and sneaky methods.
Their main victims are party-goers who fall asleep in the carriage as they return from a night out.