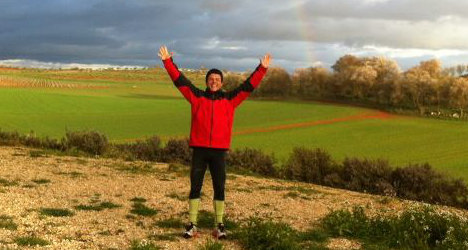 Ignacio Dean Mouliaá's hike will take him through 40 countries in five years.

"This is day six, and everything's going really well," a relaxed-sounding Ignacio Dean Mouliaá told The Local on Tuesday.

"I'm in Guadalajara province (near Madrid), not for from the village of Sacedón," said the 32-year-old from Malaga.

Mouliaá is currently walking twenty to thirty kilometres a day as he begins a five-year charity walk around the world.

He will be making the epic journey known as Earth Wide Walk with only a little cart containing a tent, a camping stove and two kilos of food.

"I came up with the idea for the trip about two years ago," this self-confessed adventurer told The Local.

"It came out of two things: a dream and a need.

"The dream was my personal dream to walk around the world while the need was to promote love and respect for the environment."

"Our job is to look after the earth for our children, and the most environmentally friendly mode of transport is walking

"Walking around the world is the best way of getting this message across," Mouliaá explained.

Mouliaá is an experienced hiker who has already clocked up four different variations of the famous Camino de Santigao pilgrimage.

He has also undertaken massive walks in the Swiss Alps and the Pyrenees, but nothing compares to this latest walk.

This journey will take in 40 countries across six continents.

"I'm really looking forward to Iran, Nepal, New Zealand and Peru," said Mouliaá, who has given up his job in the environmental field to make the trip.

"But to be honest, I'm excited about the whole trip."

Some countries — such as Syria — were crossed off the list during an intensive planning stage which lasted several months.

In other regions such as northern Africa, this intrepid hiker will have to keep an ear close to the ground.

"What mostly worries me, though, is the climate."

Mouliaá thinks the most difficult stages of the trip will be the desert zones such as Chile's Atacama Desert and the vast empty expanses of Australia.

He's also conscious of the dangers of the monsoon season in Asia.

At the same time, the young Spaniards lists robberies and possible illness as his main concerns.

"Then there is the solitude."

But as Mouliaá says: "I'm open to the whole world, and I'm more than happy for people to join me along the way."

The adventurer also says it helps that he has the full support of his friends and family.

"My friends are very excited, and very happy," he says.

"My family are more scared. They are the ones who have supported me the most, but they are also the ones who are most frightened by the distances.

Mouliaá says he hopes to see his family from time to time but there will be long stretches apart.

This young man from Malaga has set aside a budget of between €30,000 and €60,000 for the multi-year trip, and says he has raised about half of that so far.

"I'm hoping sponsors can either provide me with materials or money.

"The more support I get, the less money I will have to pay for shoes and the fewer nights I will have to spend in a tent," Mouliaá said, only half-joking.

Mouliaá is also asking for people to make donations to his blog as he looks to make up the shortfall in his budget.

"I'm taking it easy for now," he explains from his current resting spot  a little over 100 kilometres from Madrid.

"I'm only walking about five to six hours a day at the moment.

"The rest of the time I'm working on my blog and speaking to media or potential sponsors."

Mouliaá says he has about a month left in Spain, in which time he will stop off in Barcelona and Tarragona, among other places.

After that, though, he has a very long road ahead.