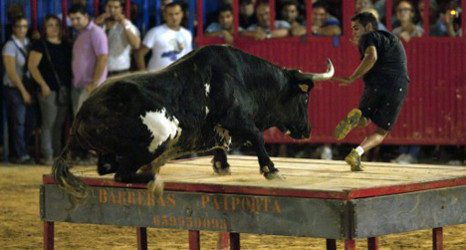 Bull event organizers paid up to €10,000 to rent Ratón for their spectacles. Photo: German Garcia
"We named him Ratón (mouse) because as a youngster he was smaller than all the other calves," the bull's breeder Gregorio de Jesús told The Local.
"As he grew up he was still lighter, but his wiry physique made him more agile and twice as fast as all the other bulls."
Indeed, his leap was so big that he could actually jump over the barrier around the edge of Spain's bullrings.
But it was Ratón's killer instinct which made him stand out as a national animal celebrity, both feared and revered across Spain .
"When he was only ten days old, he was taunted by a group of kids who broke into the ranch. They chased him around until he was worn out and then locked him up in the dark until I found him shaking in a corner several hours later," explained de Jesús.
Experts have pinpointed this trauma as the possible reason why Ratón had the killer edge.
In 2006, he killed two people and seriously injured several others at several bull running festivals held across Valencia.
Rather than ending his career, though, the bloody incidents resulted in mass media coverage for the bull.
Footage of his serial gorings even became a YouTube sensation.
There was even a flood of offers for Ratón's breeders: "Organizers were offering up to €10,000 per event (ten times the usual amount to rent a bull), which was actually still a reasonable price for them to pay because Ratón's participation guaranteed a full bullring," said de Jesús.
Asked why people were paying to watch or even come face to face with the fearsome beast, Ratón's breeder told The Local: "I guess it's a kind of morbid fascination."
As he grew older, Ratón lost speed but gained in intelligence and experience.
He was still filling up bullrings and building hype nine days before his death when he took part in his final 'encierro' (or running of the bulls) in Valencia.
"Spain's financial crisis never had an effect on his popularity," de Jesús joked.
Spain's deadliest bull passed away on Sunday in his native town of Sueca, Valencia.
"He was 13 and half years old, or 90 in bull years. He had a good innings considering all the fights he'd had with other bulls."
Gregorio de Jesús and his father José, owner of the ranch where Ratón was reared, are now thinking of having their prized asset stuffed and on display for all to admire.
"We never saw him as dangerous," said de Jesús. "He was the most noble of animals at home".