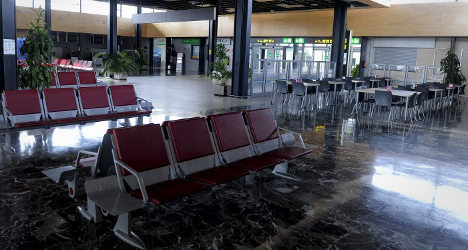 Castellón's €150-million airport was opened in March 2011 to much fanfare.

Speaking at the inauguration of the future transport hub, local council boss Carlos Fabra said its opening meant the socioeconomic transformation of Castellón was about to begin.

At the same event, the ex-president of the region of Valencia, Francisco Camps, said  the town was at "the high point of Spanish history."

However, two years on, the airport is empty and not a single passenger has ever checked in.

The daily described the venue as an airport "without direction and without planes".

Meanwhile, the UK's Guardian newspaper in 2012 described the aerodrome as a "dramatic symbol of public waste" in a region of Spain where banks have failed and the deficit has rocketed,

On Saturday, El Pais described Valencia as a broken region.

The province's public deficit is, percentage-wise, the highest of any region in Spain at 3.5 percent of gross domestic product.

Meanwhile, income from property is now four times lower than it was at the peak of the housing bubble in 2007 to 2008.

As of January 1st, the region owed over four and a half billion euros to suppliers, reported El Pais.

To make matters worse, Valencia's political representatives have also been rocked by scandals in recent years.

The ex-president of Valencia, Francisco Camps, a member of Spain's ruling Popular Party, has been linked to the Gürtel Case (Caso Gürtel), an alleged criminal network controlled by businessman Francisco Correa.

Camps was alleged to have received free suits from a tailor in Valencia as part of a circle of favours. He denied any wrongdoing, and all charges were dropped against him in a local Valencia court in 2009.

However, Madrid judges opened a bribery case against the politician in 2010.

In 2011, Camps resigned from his post as president of Valencia.