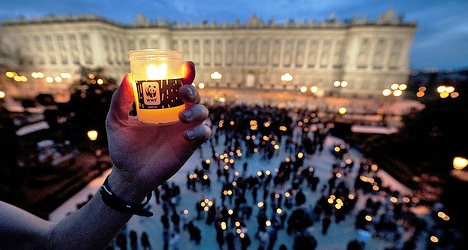 The Roya Palace in Madrid will be in darkness for an hour as part of the WWF Earth Hour on Saturday. Photo: Earth Hour

Many of Spain's major landmarks will be plunged into darkness from 8.30pm to 9.30pm on Saturday as part of a global event designed to raise awareness about global warming.

The lights-off initiative will see more than 7,000 cities and towns around the world pulling the plug on major buildings and monuments, said event organizers the World Wildlife Fund for Nature (WWF).

In Spain, 200 cities are flicking the switch to show their support for the environment.

Darkness will fall on emblematic monuments including Bilbao's Guggenheim Museum, the Alhambra in Granada and Barcelona's Sagrada Familia cathedral, among many others.

The Giralda Tower in Seville will also be illumination-free for the first time this year.

"This simple gesture is enormous expression of concern for the health of our planet," added Spain's WWF ambassador, the television presenter Anne Igartiburu.

Earth Hour has big ticket backing including FC Barcelona footballer Lionel Messi, who has asked his 43 million fans on Facebook to dim the lights.

Last year, Swedish underwear maker Bjorn Borg asked people around the world about their Earth Hour activities and found that Spaniards were the people most likely to "get sexy with someone."

The same survey found that Spanish people were the most likely to have sex with lights on.