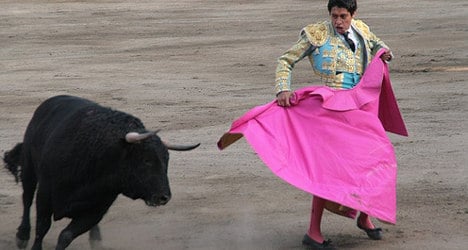 "You can show videos of bulls with the cape or the bullfighter's stick," a spokesperson for YouTube told Spain's El Mundo's newspaper.

"But you can't show the bull actually being speared or killed."

The hugely popular online video service said they were within their rights to pull the plug on the video channel which goes under the moniker @PabloLopezRiobo.

We can "eliminate any contents that don't meet our content requirements without giving prior notice," they said.

The company explained it didn't allow videos showing "negative activities" like animal abuse, the taking of drugs and bomb making.

The internet entertainment site stressed that they didn't act as vigilantes when it came to videos, and that users were the people who denounced the videos.

They added that they also took down any bloody anti-bullfighting videos if people asked them to do so.

But the move by YouTube has sparked outrage among bullfighting fans and professionals the world over.

The twitter feed of Pablo Lopez Riobois full of messages of support for both the channel and its owner.

Twitter uses @MiguelFalcon1 said he would not use the video site until the channel showing bullfights was reinstated while @josejdiaz_spain said that the YouTube decision was "shameful".

User miguela53733242 tweeted: "And they (YouTube) don't talk about pornography? They are just sucking up to anti-bullfighting lobby!"

@isiguri said that the internet company was denying liberty of expression.

Many other people, meanwhile, were calling for supporters of the bullfighting channel to sign on an online petition on the change.org website.

On Thursday afternoon, this petition had notched up two thirds of the votes it was seeking in its bid to have the channel @PabloLopezRiobo reactivated.