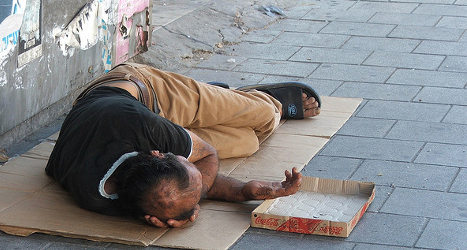 The average income for the richest 20 percent in Spain is seven times higher that of the poorest 20 percent, says Caritas. Photo: Nina J.G/Flickr

Falling salaries, government cuts to social benefits and high unemployment — currently at a record 26 percent — are behind the "unprecedented rise in income inequality" which is among the highest in the European Union, the charity said in a new report.

"The strong growth of social inequality reveals a fractured society.

Over time it will become harder and harder for poor people to escape social exclusion," Caritas secretary general Sebastian Mora said during a presentation of the report.

"The erosion of social policies has had an impact on the most vulnerable groups," he added.

Spain is going through a double-dip recession having never recovered from the collapse of a decade-long property bubble in 2008 and the government is implementing the steepest spending cuts since the country returned to democracy following the death of dictator Francisco Franco in 1975 in order to rein in a ballooning public deficit.

The number of households without any source of income has jumped from 300,000 in 2007 to 630,000 in 2012, while the percentage of people who are not able to pay for an unexpected expense has risen during the same period from 30 percent to 44.5 percent, the report said.