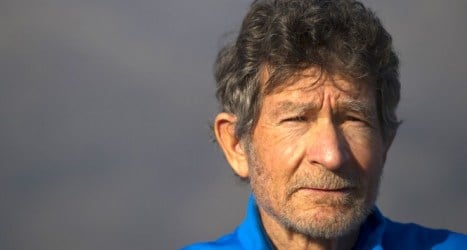 Carlos Soria is a tireless charity worker as well as being a highly accomplished alpinist. Photo: Pierre-Philippe Marcou/AFP

How does a 74-year-old extreme mountaineer keep up his strength?

"Then I eat a mint, or licorice so that I don't upset my wife."

But this is not the only food secret for this retired upholster and from Avila, about an hour's drive from Madrid.

In a recent profile in the Financial Times, Soria explained how he became a hardcore mountain climber after he and a friend met a mountaineer from Madrid.
“He taught us knots and rope work. And it was there that I met some members of a vegetarian club that organized trips to the mountains, so I joined.
"But I always stashed some sausage in my rucksack when I went out with them,” Soria told the business newspaper.
This is typical Carlos Soria — a person who follows his own dictates.

Although Soria has ticked off ten ascents of mountains higher than 8,000 meters since the age of 60, he's not letting any of it get to his head.

The climber told El Mundo newspaper in 2010 that there is nothing particularly special about going above 8,000 metres.

"The difficulty in mountains lies with lower mountains, or in the more difficult slopes of the 8,000ers like the east face of Everest."

Instead, the 74-year-old Soria is more interested in the experiences he has had along the way.

Asked recently to describe his most memorable moment in the mountains, Soria told SER radio: "This was possibly the ascent of Manaslu, which was a place I'd been to 37 years earlier.

"Back then, I had the chance to work with the small village of Sama at the foot of the mountain. And when I returned, the school was much better.

"That was really satisfying."

For this is Soria's other passion — the charity work he does with villages in the Himalayas.

On Friday — weather permitting — the 74-year old will be trying for his 11th 8,000-metre mountain, Nepal's Kanchenjunga .

At 8,586 metres, this is the third highest peak on the planet. It is always one of the most "difficult".

But as well as heading up the Expedición BBVA Kanchenjunga 2013, Soria will be popping in to Sama to check on progress at the village school.

He is currently working on the Momentum Himalaya Project which is about making Sama's local school financially sustainable.

The current plan is to expand an inn for the many tourists and mountain climbers and tourists who visit the area.

At the same time, Soria and the project organizers want to set up a cooperative so that locals can sell the high-quality yak wool the local produce.

It's a fitting assignment for a man who has remained humble and open to experience throughout his life.

In 1960, Soria travelled to the Alps and climbed in the Mont Blanc range. He then climbed other major peaks in Europe and America but it was only three decades later that he notched up his first 8,000er.

Soria is now the oldest person in history to have successfully climbed K2 (at 65 years of age) and Manaslu, at 71, among others.

Asked to describe how it felt to summit, Soria told Zoom News:  "It's a feeling like no other.

"But the idea running through my mind when I get to the highest point is that I should get down as quickly as possible.

"Summits are not a place to hang around," said the climber.

The body can't deal with the altitude for long.

"On the other hand, there's something amazing about seeing the dawn above 8,000 metres. It's something truly grand and makes any expedition worthwhile."

The climber has no plans to retire just yet but did tell Zoom News: "If I stop climbing 8,000-metre mountains, I will keep going up mountains. I love climbing."

"I love the fact that other people my age are up in the mountains doing what I do," Soria told Zoom News.

Carlos Soria during his failed attempt on Nepal's 8,167-metre mountain Dhaulagiri in 2012.