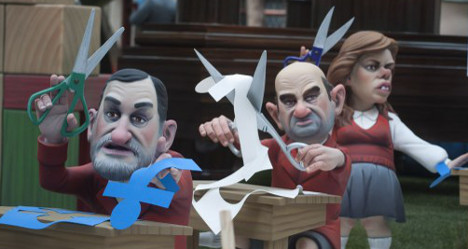 Spain's two major political parties, the pillars of a democratic system re-born after the 1975 death of General Francisco Franco, face a historic crisis as they battle popular distrust in the face of corruption scandals and recession, analysts say.

The conservative Popular Party, in power since the end of 2011, has been rocked by allegations that it used a slush fund for two decades to make secret payments to senior members, including Prime Minister Mariano Rajoy.

The Spanish leader and his Popular Party hotly deny the allegations.

But far from capitalizing on the government's woes, the opposition Socialist Party wallows even lower in the opinion polls.

A survey by Sigma Dos published last month in conservative daily El Mundo found 33.5 percent of voters supported the Popular Party — down 11.1 percentage points from their November 2011 election — but only 28.2 percent backed the Socialists.

A similar study by Metroscopia carried out for left-leaning newspaper El País shows an even steeper drop in popularity for the PP — 24.3 percent of voters chose Spain's conservative party compared to 38.1 percent in April of 2012.

But PSOE still lags behind in El País's survey with 23.1 percent of votes — a dismal year for Spain's Socialist Party overall, with equally low support figures registered in the past 12 months.

Blamed by many voters for allowing the nation to slide into economic distress, the Socialists have their own, albeit more modest, corruption scandals, and they are simultaneously fighting internal divisions.

"There is an internal battle within the two major parties which has become evident and which reflects a deeper institutional crisis," said Paloma Roman Marugan, a political science professor at Madrid's Complutense University.

"We are going through the hardest moment since Spain's democratic transition. It is not just an economic crisis, but an institutional crisis as well," she added.

Poster from the "Don't vote for them" campaign, urging Spaniards to not vote for any of the main political parties. Photo: Paco Rives Manresa

The two big parties, which have ruled Spain since a democratic constitution was approved in 1978, are under pressure from voters fuming over the allegations of corruption and as Spaniards buckle under an unemployment rate of more than 26 percent and grinding austerity measures, said Marugan.

The ruling Popular Party, especially, has been on the backfoot since January when the top-selling daily El País splashed on its front page photographs of ledgers that it said had been handwritten by the party's former treasurer, Luis Bárcenas, and his predecessor, Alvaro Lapuerta.

On Friday, a Spanish judge  summoned ex-treasurer Bárcenas to be questioned as a suspect in the affair on March 21.

Bárcenas was already being examined by the National Court over millions of euros he allegedly stashed away in Swiss bank accounts.

"They could cause a government crisis and a reshuffling of the cabinet, or the departure of Rajoy and fresh elections," Colomé said.

But both the ruling and opposition parties need "to become more transparent", the analyst said.

The Socialist Party has its own troubles.

The Catalan branch of the party has backed calls for an independence referendum in the wealthy northeastern region, defying the policy of the national party.

Rubalcaba's role is being questioned as he struggles with other divisions, too, including a scandal in the northwestern city Ponferrada where Socialist members made a political pact with a lawmaker convicted of sexual harassment.

"The fact that the economic and institutional crisis is so deep makes the crisis within the parties more acute," said economist Cesar Molinas, a former investment banker who writes a column for El País.

When Spain created its democratic system, a constitutional monarchy, it ceded great powers to the 17 regions. But the two main parties have managed to secure strong influence over supervisory bodies such as the Court of Auditors, the Bank of Spain and the oversight body the General Council of the Judiciary.

"In recent decades, the Spanish political class has developed its own interests, supporting itself on a system of capturing wealth that passes over the general interest," said Molinas.

As an example, he said, regional governments populated the boards of local savings banks with politicians, union officials and friends who then financed the proliferation of public companies, "without a clear purpose other than to generate salaries".

"The last audit of party accounts by the Court of Auditors took place in 2007. It is a joke," he said.