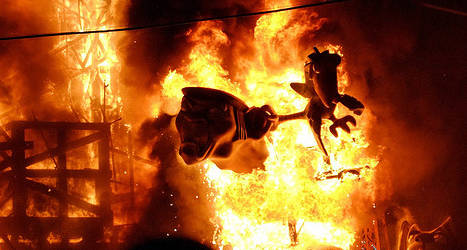 On the final night of Valencia's Las Fallas festival, a huge bonfire is lit and all the festival floats are destroyed. Photo: Emilio García

The float in question was the centre of controversy after Hindu groups declared recently that burning the images of deities would be "an act of sacrilege".

These are paraded through the streets before finally being burnt during the festival finale — a bonfire known as La Cremà — on March 19.

This year, however, the Ceramista Ros-José María Mortes Lerma group landed themselves in hot water over a decision to include images of Hindu gods on their float.

But two local Hindu groups — the Sivananda Mandir Hindu Temple and the Indian Cultural Centre — wrote to local authorities protesting that burning the float would be "an act of sacrilege without precedents which would lead to 800 million angry Hindus".

The organizing committee met with the two groups on Tuesday and the two parties agreed the burning would go ahead.

The committee said religious imagery would be removed from the float and the image of the elephant, a symbol for the god Shiva Nataraja, would be donated to the local temple.

On Tuesday night, however, at around 8.30pm, hundreds of curious onlookers gathered to watch the dismantling of the float, 20 Minutos reported.

Police were also on hand as the crane began to take apart the float with the theme Tales of Old India.

A number of locals and people associated with the Falla then intercepted several people they thought were Hindus.

Meanwhile, other locals were shouting from their balconies: "We are going to burn this float!"

At that point a group of three or four appeared carrying another person, reported 20 Minutos. Onlookers said this man was covered in petrol and was threatening to set himself on fire.

Police then detained the man and took him away.