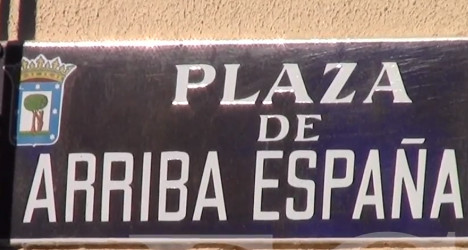 "¡Arriba España!" was Franco's fascist slogan during his forty years in power. Photo: Youtube
The group has sent a proposal to the International Olympic Committee in the hope of having street names like Calle General Yagüe or Capitan Haya changed to Calle Rafa Nadal or Fernando Alonso.
"It should be the IOC that decides what names are most representative of Olympic values, but I think we all agree Jesse Owens Street has a better ring to it than Francisco Franco Street," Edurne Rubio, vice-president of the National Historical Memory Federation's Madrid branch told The Local.
The association has been campaigning for symbols from Francoist Spain to be removed from public spaces and streets for some years now.
"There are 165 streets in Madrid that carry the names of fascist leaders who either ordered the murder of innocent people or helped suppress democracy in Spain for forty years.
"It would be unthinkable to see fascist or Nazi street names in any other country in Europe, why here then?" argued Rubio.
The group held a protest in front of Madrid's town hall on Tuesday to garner support for their cause.
They have also gathered more than 13,000 signatures on change.org to present before congress. This is despite heavy opposition by the ruling Popular Party to similar measures in the past.
In 2007, Spain passed its Historical Memory Law which formally condemned the Franco regime.
The law recognizes the victims of violence on both sides of the political fence during Franco's long period of rule.
The law also makes provision for the removal of Francoist symbols from public buildings and spaces.