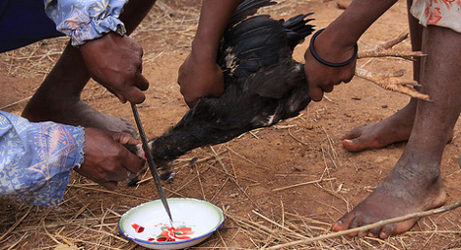 The women were forced to eat a raw chicken heart as part of the ritual. Photo: Salim Fayad
The criminal gang took on women from the impoverished African country by promising them a better life in Spain.
Before flying them to Europe, they forced each woman to swear their loyalty to the gang by having them eat a raw chicken heart during a witchcraft ceremony.
Police investigations, which began last October, have led to the crackdown of the criminal gang made up of four Spanish and 14 Nigerian suspects — all residents in Spain.
According to a police statement released on Tuesday, the group also had criminal associates in Nigeria who picked out the most vulnerable victims and organized their journeys to Spain.
The women would from then on be in debt for the travel costs and work-related paperwork the gang had supposedly paid for.
Debts usually ranging from €40,000 to €60,000 would mean the women were forced  into prostitution in several industrial estates across Málaga from the moment they arrived.
Spanish police said voodoo rituals were the most effective means to control the victims and force them into a life of prostitution.
The police added that the victim's beliefs in voodoo were so strong they feared they would go mad or die if they didn't pay off the debt.