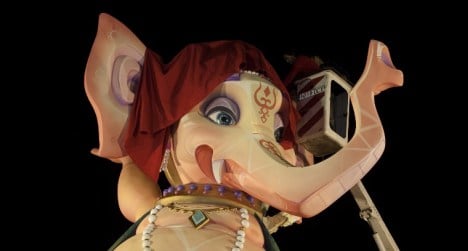 These are paraded through the streets before finally being burnt during the festival finale — a bonfire known as La Cremà — on March 19.

This year, however, one group have landed themselves in hot water over a decision to include images of Hindu gods on their float.

This float with the theme "Tales of Old India" contains likenesses of several Hindu deities.

Sources from the central organizing committee for Las Fallas told Spanish news agency EFE that the Falla collective known as Ceramista Ros-José María Mortes Lerma had come under fire from two Hindu groups who didn't want to see images of their gods burned.

The Sivananda Mandir Hindu Temple and the Indian Cultural Centre wrote to the float makers saying its destruction by fire would be an "act of sacrilege".

According to La Vanguardia newspaper, the two groups had also written to the mayor of Valencia and the government of the province requesting that the images not be burned.

The falla group involved initially decided to respond to the request by saying they would not burn the main figure on the float: an elephant representing the deity Shiva Nataraja.

They said they were doing this as "an act of good faith, understanding and cooperation," according to note obtained by EFE.

But the Hindu associations involved said "if the authorities didn't stop" the burning of the float on Tuesday, it would be "an act of sacrilege without precedents which would lead to 800 million angry Hindus".

They also said images of the act would travel around the world in a matter of hours.

In response, the organizing committee of Las Falls said the float in question would be stripped of any signs and symbols of Hindu devotion.

They also said the figure of the elephant would be donated to the Indian temple.

The groups also met today, with both sides saying they would not make any "other kind of complaint now or in the future for the good of both the festival and relations between communities".

According to EFE, police have been deployed to prevent any incidents and make sure that the organizing committee's wishes are carried out.

The Facebook page of the makers of the troubled float is full of indignant comments from fans wishing to see the object destroyed in the traditional manner.