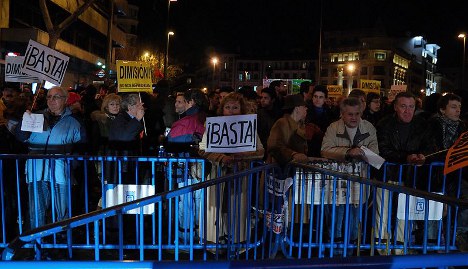 Demonstration against Bárcenas on February 2nd 2013 at the People's Party headquarters. Photo: Wikimedia

Luis Bárcenas, who allegedly channelled secret payments to Popular Party leaders including current Prime Minister Mariano Rajoy, is set to be questioned as a suspect on March 21st, a written ruling by the National Court said.

The court has been investigating Bárcenas after El Pais newspaper in January published ledgers that it said were handwritten by him, which purportedly showed tens of thousands of euros from donors being channelled to Rajoy between 1997 and 2008.

Investigations indicated "the possible existence of payments by the Popular Party treasury" made "without apparent legal justification and apparently without being reflected in the party's official accounts nor in the relevant tax returns," the ruling said.

The allegations rocked Rajoy's government as it tried to steer Spain out of a deep recession but the prime minister resisted calls to resign.

Rajoy and the party denied any illicit payments were made and have launched a lawsuit against El Pais.

Alongside Bárcenas the court summoned Alvaro Lapuerta, his predecessor as party treasurer, to be questioned as a suspect on the same date. He too has been named in press reports of alleged irregular payments.

In a separate corruption affair also involving Popular Party officials, the court last month slapped a travel ban on Barcenas after questioning him over millions of euros he held in Swiss bank accounts.