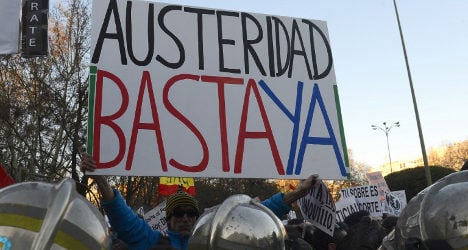 A demonstrator calls for an end to austerity measures imposed by a Spanish government which is trying to slash public debt. Photo: Pierre-Phillipe Marcou/AFP

The massive debt levels were owing to increases both at the federal level and that of the country's 17 autonomous regions.

The figure, which shot up 14.8 percentage points last year, was well above the European Union (EU) limit of 60 percent of GDP, but came in a bit below the government's own forecast of 85.3 percent.

In the last three months of 2012 alone, public debt surged by 6.8 percentage points.

The figures, used by the EU to determine if it must launch a procedure to correct a country's excessive public deficit, did not include a eurozone loan of €41.3 billion ($53.8 billion) to the Spanish banking sector.

Numbers from the Spanish central bank show debt wracked up by the Spanish government and social security system alone amounted to 72.3 percent of GDP last year, compared with 58.5 percent at the end of 2011.

The rest of the debt was owed by autonomous regions and local governments.

This year, the Spanish government expects the country's total public debt to climb further to around 90.5 percent of GDP.

That could test the confidence of financial markets which had recently begun to improve with respect to Spain, but which on Thursday showed signs of the jitters.

In late trading on the secondary market for sovereign debt, the rate on benchmark Spanish 10-year bonds edged up to 4.860 percent from 4.766 percent at the close on Wednesday.