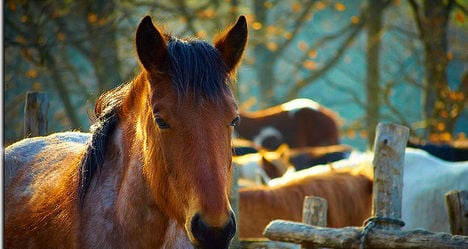 From pet to pest: Many of Spain's horses are ending up on French and Italian dining tables. Photo: Moya Brenn

In Spain's boom years, they were a massive status symbol: horses you could take for a gallop on the weekend.

Now abandoned as a result of the economic crisis, these animals are being shipped off in their tens of thousands to the nation's slaughterhouses.

"A few years ago, before the crisis, a lot of people thought: I'll buy a big car, a big house and why not a horse?" said Virginia Solera, a woman who helps run a shelter in Andalusia for the luckier equine cast-offs.

The boom years had a particularly strong impact on Andalusia. Many people left the fields to work in the flourishing construction industry and found themselves out of work when the property bubble burst in 2008.

The Spanish government says the number of horses slaughtered in abattoirs has doubled since then, with 60,000 killed in 2012.

"The way things are now no one is buying horses, the feed is expensive and no one wants a horse, so I've had to stop sales," said horse dealer Manuel González Melendi.

"I've sold some cheap and the others have gone to the slaughterhouse."

He says looking after a horse can cost €400 a month. Now, though, many owners are cutting their losses by sending them to the slaughter in return for around €150 per horse.

Horsemeat, which has been the subject of a Europe-wide food scandal over recent weeks, is not popular in Spain.

This means 90 percent of the slaughtered beasts are exported, mostly to France and Italy, Aprosa says.

"Everyone is taking advantage of the crisis to get rid of things they don't want, things they once took responsibility for," said Solera.

"They try to hang onto the car and the house, but not the horse. The horse they just get rid of."