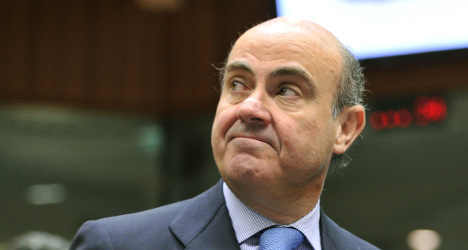 "Its commercial activity has begun, starting with the sale of real estate assets, and there are already some transactions that are just waiting to be signed," Spain's Finance Minister Luis de Guindos told parliament.

The bad bank, known as Sareb, was formed by the fusion of eight Spanish banks including Bankia, one of four that were nationalized last year.

"Sareb's managers hope to carry out sales of around €1.5 billion ($2.0 billion) in the current year," de Guindos said.

Sareb has a total of €50 billion in problem assets to flog off, the legacy of a real estate bubble that burst in 2008 and threw Spain into financial and economic crisis.

Sareb plans "a detailed process of revision" for each of these assets to determine how to dispose of them, he said.

Bankia was formed in 2010 from the fusion of small regional savings banks, in the first round of a major restructuring of Spain's banking sector.

It was listed on the stock market but in May 2012 the Spanish government had to nationalize it to prevent its collapse.

That led in turn to Spain seeking a bailout from the eurozone for its financial sector.

Associations representing customers who lost their savings in Bankia have brought legal action accusing it of misleading them by converting their money into high-risk "preferential" shares.

De Guindos said on Tuesday that the state supervisor set up to oversee Spain's banking overhaul, FROB, would this week order an arbitration procedure for such customers.

"The aim is to detect cases where there could have been malpractice in the marketing of the products that affected the validity of the transaction," he said.