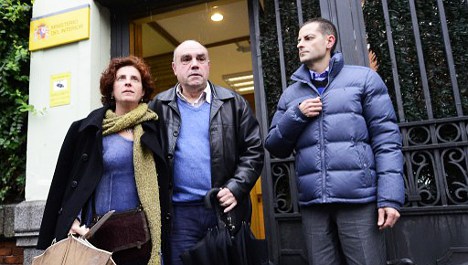 Yolanda Gonzalez, a 19-year-old Socialist Party activist who had appeared in photographs at the head of student protest marches, was shot two times in the head at close range in a field near Madrid by a far-right commando who suspected her of belonging to the armed Basque separatist group ETA.

Gonzalez's murder shocked Spain, which at the time was going through a tumultuous transition to democracy following the death of right-wing dictator General Francisco Franco.

The man who shot Gonzalez, Emilio Hellin Moro, a former member of the Grup 41 commando with ties to the far-right party Fuerza Nueva, changed his name to Luis Enrique Hellin after he was released from jail in 1996 after serving 14 years of a 43-year jail sentence, top-selling newspaper El Pais reported last month.

According to the left-leaning paper, the 63-year-old expert on IT-related criminal investigations secured contracts under the changed name with Spain's security forces, acting for years as an advisor to Spain's top court and proving training courses to police on how to carry out electronic eavesdropping and comb computers and cellphones for evidence.

"This person assassinated Yolanda Gonzalez in cold blood, a peaceful girl, she was a very lively person who wanted at her young age to change the world," Yolanda's brother Asier Gonzalez, who was just six years old at the time of the murder, told reporters after a private meeting with Interior Minister Jorge Fernandez Diaz's chief of staff.

"We asked them to open an official inquiry and that they offer an explanation to parliament," he added.

The interior ministry refused to comment on the meeting, calling it a "private" matter.

Moro was sentenced to jail in 1982 but five years later he fled to Paraguay while on a furlough granted to him by prison authorities.

He was arrested in July 1989 and handed back to Spanish authorities after a Spanish investigative journalist tracked him down.