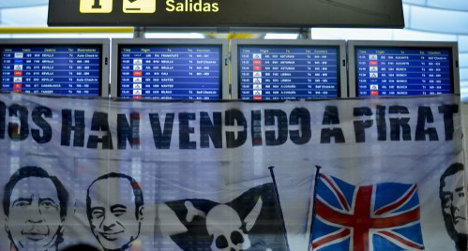 A banner reading "They have sold us to pirates", one of many messages by Iberia strikers deemed as anti-British. Photo: Pedro Armestre/AFP
Messages on placards at anti-cuts demonstrations by staff of the Spanish airline have included "British go Home" and "Iberia: Spanish Land. British Keep Away". Others have carried images equating the British union flag with the skull and crossbones, the traditional pirates' banner. According to some staff, British flags have been burnt at demonstrations.
But spokespeople for both Spain's major trade union UGT and Iberia – as well as ordinary staff – have denied that these messages represent the views of most protesters.
"There are three or four or five people doing this," Iberia employee Berta told The Local. "These are the sorts of acts of vandalism that happen in all demonstrations when emotions run high. I don't agree with it at all and lots of Iberia staff have criticized the flag burning in our online forums."
Iberia says some 1,300 flights will be cancelled this week as workers begin a second round of strikes to protest the loss-making company's plans to lay off almost a fifth of its workforce.
Ground and air staff are protesting a decision by International Airlines Group (IAG) — the UK holding company that owns British Airways and Iberia — to axe 3,800 jobs at the Spanish flag carrier.
"This isn't Trafalgar", insisted UGT spokesman Francisco Rodríguez.
"There's more of an anti-BA or anti-Willy Walsh (IAG CEO) sentiment that prevails among Iberia employees," he told The Local.
"When BA and Iberia merged, the move was meant to be beneficial for both companies. But while BA is setting up new routes and signing contracts with Boeing for more aircraft, 3,800 Iberia employees are about to be given the boot. It's completely immoral!"
Iberia press officer Santiago de Juan told The Local: "The problems at Iberia are related to a lack of competitiveness and the serious effects of the crisis here in Spain. There is also the strong competition from low-cost airlines."
'I believe (the anti-British Airways sentiment) is a strategy on the part of Sepla (pilots union). They have repeatedly made statements to the effect that British Airways is using the merger to, for example, fill a hole in that airline's pension fund."
British Airways staff will hold a lunchtime demonstration on Wednesday in support of their Iberia colleagues. 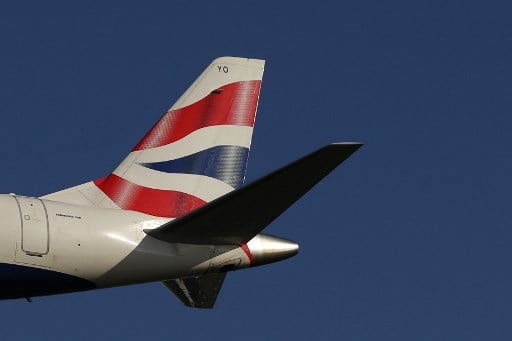