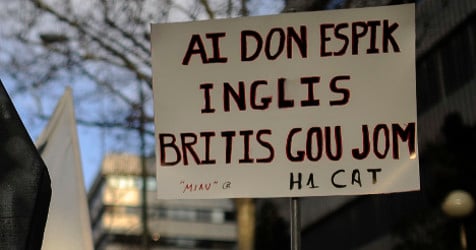 One of the anti-British banners carried by striking Iberia staffers. Photo: Pedro Armestre/AFP

Spanish news agency Europa Press reported that 315 Iberia flights had been cancelled on Tuesday, the seventh day of strikes at the airline.

Ground and air staff are protesting a decision by  International Airlines Group (IAG) — the UK holding company that owns British Airways and Iberia — to axe 3,800 jobs at the Spanish flag carrier.

Almost half the flights affected by Tuesday's strike action are operated by Iberia while the rest are run by Air Nostrum, Iberia Express and Vueling, reported Europa Press.

Some of the recent Iberia strikes have had an anti-British theme with many Iberia staff carrying banners bearing messages like "British Go Home" and "Iberia: Spanish Land. British Keep Away."

The head of the powerful Spanish pilots' union Sepla, Justo Peral, told Spanish public television TVE that Iberia was being used to plug a deficit in British Airway's pension scheme of over €6 billion.

"The merger is damaging for Spain and Iberia, which is being infected by the serious structural deficit which BA's pension fund has," he said in the interview.