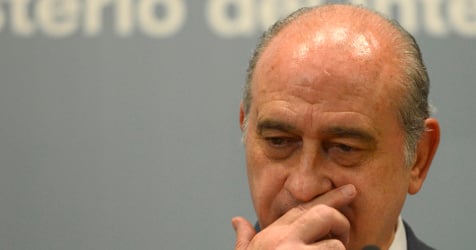 Gay marriage "should not have the same institutional rights as natural marriage," said Fernández Díaz, the interior minister of Spain's ruling Popular Party at the Spanish embassy in Rome last Wednesday.

Spanish media first picked up on the controversial comments this week.

Speaking to an audience that included members of the Vatican's Holy See, the minister said that the "survival of the (human species) was not guaranteed by homosexual marriage".

The comments came during a forum on "Religion in the Public Sphere" hosted by Spain's embassy in Madrid.

"We can't argue against marriage between people of the same sex on religious grounds," said Fernández Díaz in his speech. "But there are rational arguments."

He then cited the survival of the human species as one of these.

The comments have raised strong reactions in Spain.

The country's Federal Association of Lesbians, Gays, Transexuals and Bisexuals (FELGTB) called on Fernández Díaz to resign because he had criticized an institution guaranteed "by the constitution" and "supported by the immense majority of Spanish citizens".

Meanwhile, El Pais quoted a tweet from the Popular Party's Secretary for Justice, Rights and Liberties Iñaki Oyarzábal. Oyarzábal said that the Diaz' comments were "unfortunate" and had "no connection" with the party.

"Donkey meat has been discovered in the comments of Fernández Díaz' about gay marriage," tweeted journalist Emilio Silva Barrera on Monday.

A petition calling for Fernández Díaz to resign on the increasingly influential change.org website had garnered 3,158 signatures at 10am on Tuesday.

According to El Pais, Spain's interior minster has been a long-term opponent of Spain's gay marriage law. He first expressed his opposition when the law was put up by the previous socialist government under José Luis Rodriguez Zapatero back in 2005.

Jorge Fernández Díaz chalked up a personal disapproval rating of 65 percent in a Metroscopia poll conducted by El Pais on February 27th and 28th. Only 43 percent of people interviewed knew what his position within the government was.