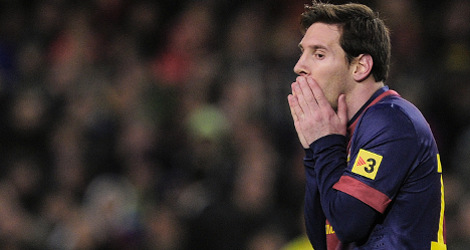 "The absolute priority for the club is the recovery of (Tito) Vilanova, everything else is secondary. If we win some titles, great, but if we don't too bad," club president Sandro Rosell told a press conference.

Rosell visited the coach last week and said Vilanova was "very motivated and very implicated in the daily life of the club" adding that "God willing" Vilanova could return for a potential Champions League quarter-final if the team can overturn a 2-0 deficit against AC Milan in their home leg Last 16 clash next week.

The four-time European champions are well on their way to a 22nd Spanish title. They hold a commanding 11 point lead on Atletico Madrid but have gone off the boil in recent weeks with defeats against Real Madrid in both the Spanish Cup and league as well as the reverse at the San Siro.

When asked about a potential change in the managerial hot seat at the Nou Camp, Rosell poured cold water on the idea of a new coach coming in to replace Vilanova or interim coach Jordi Roura.

"We have never considered the option of bringing in a new coach. We will wait as long as it takes for him (Vilanova) to return," he said.

"(Jordi) Roura is a hero. We should thank him for taking the responsibility we have entrusted him with."