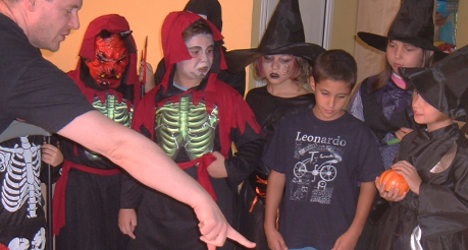 Simon Grant with students at the Penny Lane English School

In this interview, he talks about setting up a business in Spain and how to make whole process a lot less painful.

So what happened to your travel plans?

When my wife and I decided to leave England, I really fancied going to China or Russia but my wife didn't agree. So Spain was a toe in the water for us, a compromise. Years later, and we’re still here!

And why did you settle on Spain?

Well I did my CELTA (an English teaching certificate run by Cambridge University) in Seville and liked it. In fact, when we decided to come to Spain, I wanted to live there, but I didn’t want to put any pressure on my wife. So we did our homework before we came out. We took long weekends in various cities and then finally settled on Seville.

I actually found a teaching job at a school in Seville before we came out, and the interview process for that allowed us to confirm that Seville was indeed the right place.

So did you continue liking it after you moved there?

Looking back I thought my Spanish was much better than it was. I had basic tourism Spanish. I did a Spanish A-level (high school leaving certificate) in the UK but when we came to Seville we needed a mattress and a frying pan and we had no idea!

But yes, I liked the city, and still do.

Why the move from teaching to running a school?

Opening a school had been a plan of mine from the start. Before I started teaching I was an administrator at a university for years and I thought that with teaching experience as well I could run a school.

And why did you choose the location you did?

We saw a gap in the market, and knew there was a large pool of potential students in the area, which is just a few kilometres from Seville.

Was the set-up process difficult?

Opening the school actually wasn't complicated but there was a lot of bureaucracy. I didn't realize that I'd have to go to so many departments and do the same things over and over again.

You assume the wheels of government turn the same way in all European countries but they definitely don’t.

On the other hand, the local government business advisors helped me as well. They walked me through the steps, giving me the right forms and telling me where to go. It all just took me a lot longer than I expected!

Then there was the Spanish language aspect. You go from ‘tourism Spanish’ to ‘I can live here Spanish’ to ‘setting-up-a-business' Spanish, and each one is a big jump.

What’s the most challenging part of your job?

Right now it’s finding the balance between investing in administration and teachers. To date, when the business has grown, we've put the money into teachers, but the administration work has increased a lot as well and I'm the only person dealing with it. That means I've had to drop teaching, which is a shame.

And how are things going with the crisis?

You notice that more people are dropping out. People pay their school fees monthly, and there is definitely more of a turnover. For parents with two or three children studying English it’s tough. But we are doing OK. In our first year, we had around 80 students in one centre and now we have around 350 pupils at two different sites.

What advice would you give to someone eyeing a move to Spain at the moment?

I would tell people to do your homework. A lot of people from the UK have this idea that Spain is cheap because they come here on cheap packages holidays. And while it's true that some things are cheap, you're not necessarily going to be as well off as you think if you're earning euros.

I also certainly wouldn't recommend the move to everyone. If you're a language teacher, you're probably OK. As a native speaker with qualifications, you're in a good position.

But if you're looking at unskilled work, there are five million other people competing for the same jobs.

And what would you say to someone thinking of setting up a business here?

Get the best advice you can! Get an asesor (business advisor), and look at all the avenues of help that are available.

Do you need to speak Spanish?

As a teacher, no. I'm more than happy to take on teachers who don't speak Spanish. It can even be an advantage in the classroom because if the students think you can't speak Spanish they will only try in English, and that's good for language learning.