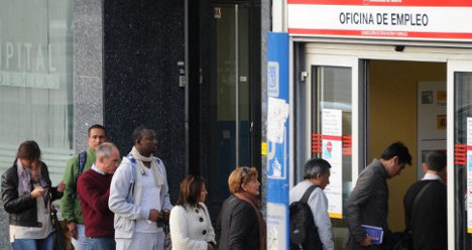 People queue outside a government employment office in the centre of Madrid. Photo: Dominique Faget/AFP

The number of people registering for unemployment benefits rose 59,444 or 1.19 percent, over the last month to 5,040,222 as companies in all areas of the economy continued to lay off staff, the ministry said in a statement.

The overall unemployment rate is released separately and quarterly. It stood at 26.02 percent in the fourth quarter — the highest level since the re-birth of Spanish democracy after the death of General Francisco Franco in 1975.

Spain is experiencing a double dip recession, having never recovered from the collapse of a property boom in 2008. Prime Minister Mariano Rajoy's conservative government has put in place steep spending cuts and tax rises, aimed at saving €150 billion ($194 billion) between 2012 and 2014, which have prompted mass street protests.

It predicts an economic contraction of 0.5 percent in 2013 followed by an expansion of 1.2 percent in 2014, a more optimistic forecast than those of most analysts and international organisations.