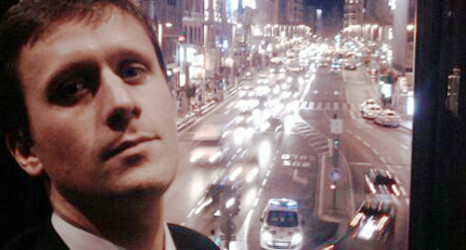 How did you end up moving to Spain?

I didn't want to live in Paris to be honest. I'd just completed my MA in International Management from Toulouse University and the obvious choice would've been to move to the capital. But I saw the option of living and working abroad as a bigger challenge.

I had three choices: Ireland, Germany or Spain. By that stage I'd met my girlfriend, who's Spanish, and given that I was getting plenty of responses to job offers from companies in Spain, I decided to go for it.

So did you find a job before you moved?

No, but I had done within three months of moving to Madrid with my girlfriend. My Spanish was very basic back then so I'd go to the library in the mornings to study grammar, look for work online in the afternoons and hang out with Spanish friends in the evening to practise speaking.

I had several job interviews and was then offered a position in online marketing for a Spanish start-up company .

Did not speaking Spanish fluently make your job search harder?

Well, my Spanish was nowhere near fluent by the time I got the offer. I think if you work for a company with an international presence, speaking other languages aside from Spanish can be just as valuable.

I kept having to swap between English and Spanish in my interview, but I think they saw potential in that I came across as motivated. And I also speak French and German.

So how is working in Spain compared to in France?

I worked in France for six months and another six in Germany before coming to Spain, so I may not be in the best position to answer that.

What I can say is that in my experience Spanish workers aren't lazy. Yes, they take a break for breakfast at 11am and then take an hour or two off for lunch, but they leave the office much later than in the rest of Europe. I'd say they just have a different vision of time.

To be honest, I think I'm more Spanish than French in the way I plan out my work agenda. Other countries seem to have a more rigid sense of time management, but then again the Spanish might have something to learn from them.

How about Spanish bosses?

I can only talk from my experience, which has generally been good. It's true you do get bosses who promise you the world and then when it comes to the crunch, they give you a different story, whether it be about a promotion, salary, or whatever. I guess the eurozone crisis has forced many bosses to change their initial plans.

In any case, I've found online marketing to be a field where bosses put their trust in their employees. They may stick to the traditional style of management still common in Spain but they still strive to be innovative and keep up with new internet trends.

And you now work for Yahoo?

Yes, I've been an international account manager there for six months now and I'm really enjoying it. It gives you greater peace of mind to work for a big multinational rather than for a smaller company trying to survive in these difficult times.

Most of my colleagues are Spanish but speak French and English.

Is there anything that frustrates you about working in Spain though?

I guess the fact that most multinationals in Spain have their headquarters elsewhere, so moving up the ladder is not necessarily that easy.

How about the notorious 'enchufe': the idea that , in Spain, who you know is more important than what you know?

It definitely plays a part. But then again, if you want to succeed anywhere, networking is crucial. You have to do your homework, find out who they key players are, go to events, use social media and gain visibility overall.

So are you planning on staying in Madrid?

Absolutely!  Put it this way, if you earn a relatively good salary and you're happy with your job, there aren't many countries that have as high a standard of living as Spain.