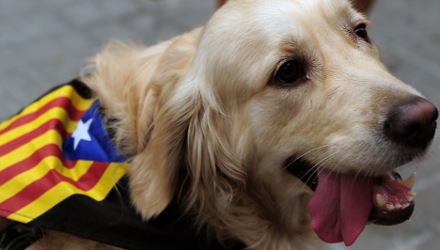 A dog wearing an "Estelada" Catalan flag during the Day of Catalonia on September 11th 2012. Photo: Lluis Gene/AFP

The region's parliament in January passed a 'declaration of sovereignty' which it said provided grounds for Catalonia "to exercise its right to decide" on its political future.

The national government rejects efforts by Catalonia's leaders for greater independence, fanned by the economic crisis which has turned Spain's richest region into its most indebted.

The central government said in a statement on Friday that the Catalan declaration was against the country's constitution, which guarantees "the indissoluble unity of the Spanish nation".

"The cabinet has passed an agreement setting out a legal challenge before the Constitutional Court against the Catalonian Parliament's measures that approve a declaration of sovereignty," it said.

The declaration said Catalonia would hold a popular consultation on its future after discussions with the Spanish state, European authorities and the international community.

Mas, who has promised to hold a referendum in 2014, called the government's announcement on Friday "misplaced".

"If they appeal to the Constitutional Court against a democratic declaration by a parliament, that means they are not willing to hold a dialogue," he said.