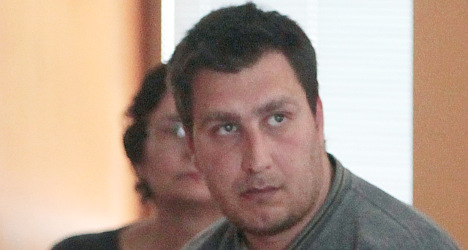 The charity, which aids victims of crimes overseas, was acting as a representative for Mills-Westley's children who attended the trial on Tenerife, the popular tourist destination where she was killed in 2011.

Spanish media sources reported that the court found Deyanov not criminally responsible because he killed Mills-Westley during an acute bout of paranoid schizophrenia.

But it ordered that he be held for 20 years in a psychiatric unit because of the danger he posed, the reports added.

Deyanov had pleaded not guilty to repeatedly stabbing and then beheading Mills-Westley, whom he did not know, with a knife at a Chinese general store in May 2011.

During his trial he said he used crack and LSD and was haunted by voices which told him how to act.

Witnesses told the court they saw Deyanov leave the store with the woman's bloodied head in his hand.

Police arrested him as he was struggling with a security guard and trying to escape.

The victim's daughters, Sarah Mears and Samantha Gomes, said the trial "has been incredibly hard on us and has reiterated the horror of Mum's death," in a statement released before the sentencing.

"We have had to listen to graphic descriptions of what happened to her," they added.

Mills-Westley, from Hellesden, a suburb of the town of Norwich in eastern England, had been living in Tenerife after retiring from her job as a road safety officer.

Deyanov reportedly had a history of mental illness. The BBC said he had previously been detailed in hospitals in north Wales and Tenerife.

"We would like to make a plea that the care of people like Deyan Valentinov Deyanov is taken more seriously," the daughters said in their statement.

"He is a young man who has clearly been failed by a number of authorities, in the UK, Spain and most likely others."

In their statement, Mrs Mills-Westley’s family described the grandmother as a “highly gifted, selfless person with so much love in her heart” who had been “in the wrong place at the wrong time.”

In similar news, on Thursday a judge in the Tenerife town of Arona ordered a Polish man to spend time in a psychiatric hospital after he attacked two local policeman who asked him for ID, La Opinion de Tenerife reported.

The Polish man was committed to the same hospital where Deyanov was ordered to spend four months after he attacked a security guard in 2011. In the attack, the Bulgarian hit the guard in the face with a rock.

The guard lost three teeth in the assault.